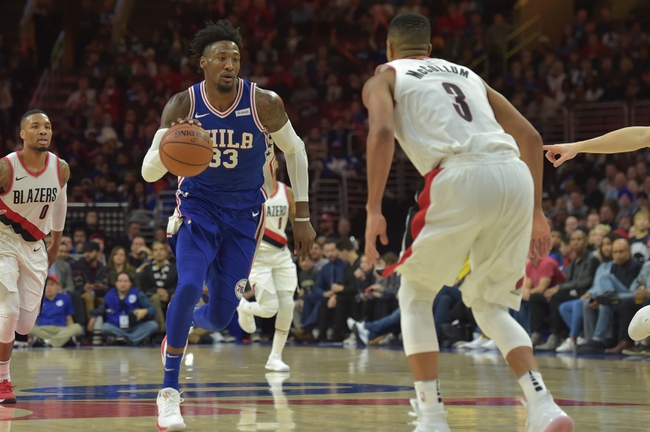 The Philadelphia 76ers and the Portland Trailblazers duke it out at the Moda Center on Thursday night.

The Philadelphia 76ers have been in a major slump as they’ve lost nine of their last 11 games but they will be feeling a little better after their 105-98 win at New York on Christmas Day. Joel Embiid led the team with 25 points, 16 rebounds and three assists, JJ Redick returned from a two-game absence and added 24 points while TJ McConnell chipped in with 15 points and four assists off the bench. As a team, the 76ers shot 42 percent from the field and 10 of 29 from the three-point line while holding the Knicks to just 40 percent shooting from the field and four of 15 from the three-point line. With the much-needed win, Philadelphia improved to 15-18 overall and 8-9 on the road.

Meanwhile, the Portland Trailblazers have won four of their last seven games and they will be feeling much better after snapping a three-game skid with a 95-92 win over the Lakers on Saturday. Maurice Harkless led the team with 22 points off the bench, Shabazz Napier added 21 points with five assists while CJ McCollum chipped in with 17 points. As a team, the Trailblazers shot 41 percent from the field and 10 of 25 from the three-point line but this game was close till the end as the game was actually tied at 91 with 1:45 left in the fourth quarter. Damian Lillard missed his second straight game with a strained right hamstring but with the extra few days of rest, he should be good to return to action.

The 76ers will be feeling relieved after beating the Knicks on Christmas Day, but it's hard to get too excited as they've been struggling for a while now. The Trailblazers haven't been playing anywhere near their best either but they're in decent form and they will want to improve on their 7-10 home record. I want to take the Trailblazers to get the win at home with Lillard returning to the starting lineup, but the 76ers have covered in eight of their last 11 road games while the Trailblazers have covered in just one of their last eight home games and I think those trends continue in this one.