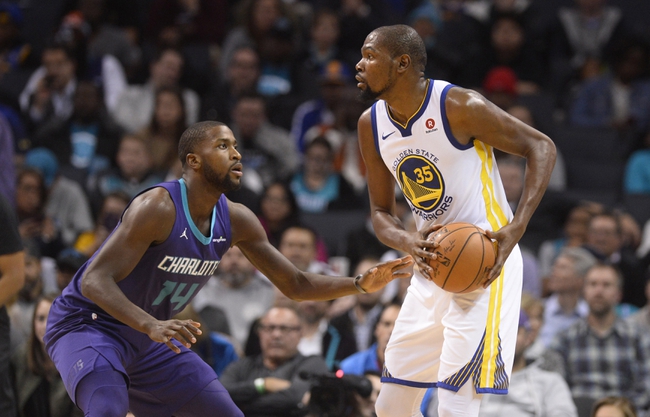 The Golden State Warriors play host to the Charlotte Hornets at the Oracle Arena on Friday night.

The Charlotte Hornets are in a world of hurt as they’ve lost nine of their last 12 games and they will be hoping to bounce back after falling to the Celtics in a 102-91 home loss on Wednesday. Kemba Walker led the team with 24 points on nine of 22 shooting, Marvin Williams and Michael Kidd-Gilchrist chipped in with 13 points each while Dwight Howard had 12 points with 17 rebounds. As a team, the Hornets shot 36 percent from the field and seven of 23 as they rallied in the third quarter to cut a 19-point deficit to just one point after three quarters. Unfortunately, they were outscored by 26-16 in the fourth quarter to fall to 12-22 on the season and 10-10 at home.

Meanwhile, the Golden State Warriors have won 13 of their last 14 games and they will be aiming for a third straight win after blowing past the Jazz in a 126-101 home win on Wednesday. Kevin Durant led the team with 21 points on seven of 10 shooting, Patrick McCaw added 18 points while Klay Thompson and Nick Young each scored 15 points. As a team, the Warriors shot 59 percent from the field while holding the Jazz to just 40 percent shooting and most of their work was done in the third quarter where they dominated the Jazz by 42-22 to set up the easy win to improve to 28-7 overall and 14-4 at home.

Stephen Curry remains doubtful for this game as the Warriors are targeting Saturday for his return. The Warriors have been on a tear and looked great against the struggling Jazz, so I’m expecting a similar result as the Hornets lost nine of their last 12 games while only covering in three of their last 17 road games.