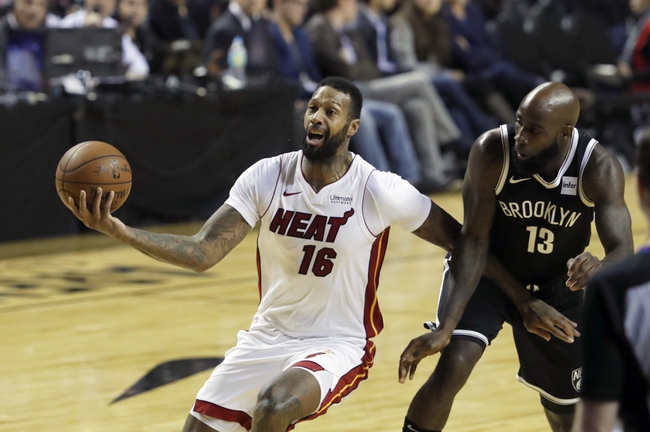 The Brooklyn Nets and the Miami Heat duke it out at the American Airlines Arena on Friday night.

The Brooklyn Nets have lost seven of their past eight games and they will be hoping to snap a three-game skid after losing to the Pelicans by 128-113 on Wednesday. Caris LeVert led the team in scoring with 22 points, Nik Stauskas added 21 points while Quincy Acy chipped in with 18 points. As a team, the Nets shot 45 percent from the field and 19 of 38 from the three-point line but they were always fighting a losing battle after falling behind by 69-46 going into halftime. The Nets just had no answer for the Pelicans who put on an offensive clinic with Rajon Rondo setting a franchise record and career-high 25 assists. With the loss, Brooklyn dropped to 12-22 overall and 5-12 on the road.

Meanwhile, the Miami Heat have been in solid form as they’ve won seven of their past 10 games and they will be looking to stay hot after blowing past the struggling Magic by 107-89 on Tuesday. Josh Richardson led the team in scoring with 20 points, Wayne Ellington provided the spark off the bench with 18 points while Tyler Johnson chipped in with 17 points. As a team, the Heat shot 45 percent from the field and 11 of 33 from the three-point line but this game was actually tied after three quarters, but the Heat dominated the fourth quarter by 39-21 to improve to win the game and improve to 18-16 on the season.

The Nets will look to come out with guns blazing after getting embarrassed by the Pelicans on Wednesday, but they continue to struggle against the better teams in the league. Dion Waiters will miss his third straight game while James Johnson will miss his second straight game, but I’m still sticking with the more reliable Heat who have covered in 13 of the last 17 meetings.