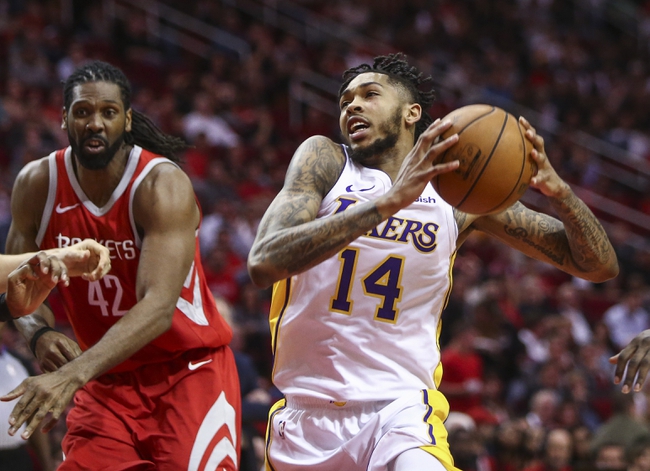 The Los Angeles Lakers and the Houston Rockets collide at the Toyota Center on Sunday night.

The Los Angeles Lakers have lost 10 of their past 13 games and they will be hoping to avoid a sixth straight defeat after falling to the Clippers in a 121-106 rout on Friday. Jordan Clarkson led the team in scoring with 20 points and eight assists off the bench, Julius Randle and Brandon Ingram each scored 18 points while Larry Nance Jr. chipped in with 16 points on six of seven shooting. As a team, the Lakers shot 49 percent from the field but just three of 19 from the three-point line as they fell behind by double digits in the first quarter and never threatened. Josh Hart started in place of the injured Lonzo Ball but had just two points as Clarkson played 35 minutes off the bench. With loss, Los Angeles fell to 11-23 overall and 6-12 at home where they’ve now lost seven straight.

Meanwhile, the Houston Rockets have been going through some struggles of their own as they’re now hoping to avoid a sixth straight defeat after falling to the Wizards in a 121-103 rout on Friday. James Harden led the team in scoring with just 20 points but he needed more support as no other starter finished in double figures. New recruit Gerald Green added 18 points off the bench while Eric Gordon chipped in with 16 points as the Rockets shot 42 percent from the field and 14 of 48 from the three-point line but they couldn’t really gain any ground after falling behind by 10 points going into halftime. With the loss, Houston dropped to 25-9 overall and 12-4 on the road.

I thought the Rockets would come out guns blazing after blowing a 26-point lead in the embarrassing loss to the Celtics, but instead they fell behind early and never looked threatening against the Wizards. Perhaps now the Rockets will snap out of their funk and blow out the struggling Lakers by double digits, but this just seems like too many points to be giving the Lakers who won the last meeting by 122-116 back on Dec 20.