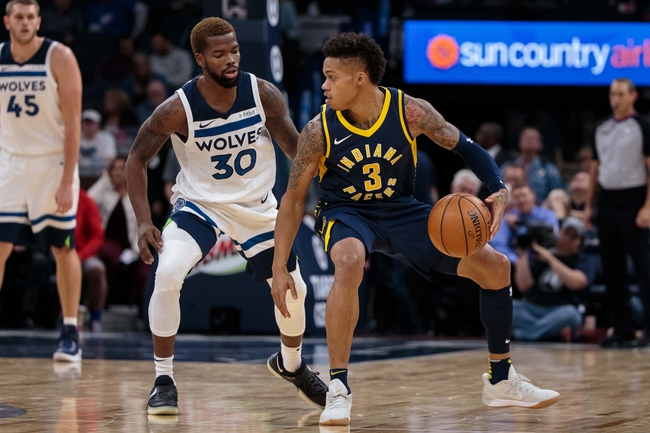 The Minnesota Timberwolves and the Indiana Pacers duke it out at Bankers Life Fieldhouse on Sunday night.

The Minnesota Timberwolves have won six of their past eight games but they will be looking to bounce back after having their five-game win streak snapped by a 102-96 road loss at Milwaukee on Wednesday. Karl-Anthony Towns led the team with 22 points on eight of 12 shooting, Andrew Wiggins added 21 points while Jimmy Butler chipped in with 20 points and seven assists. As a team, the Timberwolves shot 48 percent from the field but just nine of 28 from the three-point line as they dominated the Bucks to lead by as many as 20 points before falling flat on their faces in the fourth quarter where they were outscored by 27-12. With the loss, Minnesota fall to 22-14 on the season and 10-8 on the road.

Meanwhile, the Indiana Pacers have lost six of their past nine games and they will be hoping to snap a three-game skid after falling to the Bulls in a 119-107 road loss on Friday. Darren Collison started in place of the injured Victor Oladipo and led the team with 30 points on 12 of 16 shooting, Lance Stephenson added 18 points while Domantas Sabonis chipped in with 14 points off the bench. As a team, the Bulls shot 46 percent from the field and just seven of 22 from the three-point line but they were always fighting an uphill battle after falling behind by 17 points late in the second quarter. With the loss, Indiana fall to 19-17 overall and 8-9 on the road.

Oladipo is currently listed as doubtful to play as he continues to deal with pain and swelling in his knee but they likely won’t rush him back given how important he is to the team. With that being said, the Pacers have been struggling to win games without him so I think I’d rather side with the well-rested Timberwolves to bounce back after getting embarrassed by the Bucks on Wednesday.