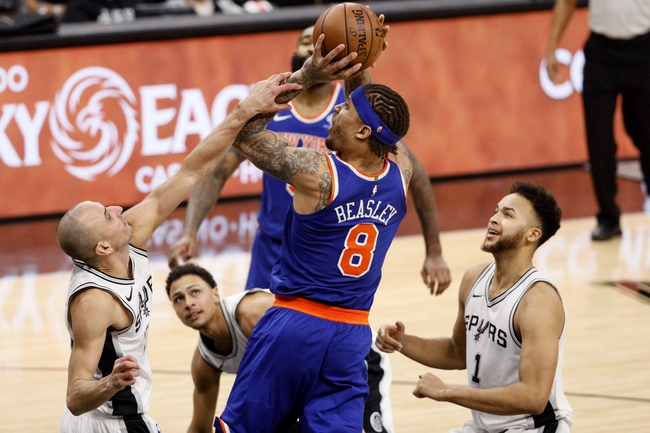 The San Antonio Spurs pay a visit to the New York Knicks at Madison Square Garden on Tuesday.

The San Antonio Spurs have won six of their past eight games but they will be looking to bounce back after having their three-game win streak snapped by the Pistons in a 93-79 road loss on Saturday. Kawhi Leonard led the team with 18 points in 28 minutes of action while LaMarcus Aldridge added 15 points with 11 rebounds but no other player finished in double figures. As a team, the Spurs had one of their worst games in recent memory as they shot just 37 percent from the field and five of 26 from the three-point line, but they were right in the game until the Pistons opened the fourth quarter with a 20-6 run to extend their lead to 18 points and put the game to bed. With the loss, San Antonio dropped to 25-12 overall and 8-10 on the road.

Meanwhile, the New York Knicks have been in a slump as they’ve lost five of their last seven games but they will be feeling a little better after snapping a four-game skid with a 105-103 win at New Orleans on Saturday. Kristaps Porzingis led the team with 30 points on 11 of 22 shooting, while Jarrett Jack and Michael Beasley scored 15 points apiece. As a team, the Knicks shot 43 percent from the field and five of 19 form the three-point line as they escaped with a win on a couple of free throws from Jack after leading by 11 points at halftime. With the win, New York improved to 18-18 overall and 3-12 on the road where they had lost four straight before Saturday.

The Knicks looked great in their win over the Pelicans and nothing will do more for their confidence than a win over the Spurs who are always tough to beat. However, the Spurs are finally getting healthy with Leonard back on the court and they should be good enough to bounce back from their rare double-digit loss with a nice road win in this one.