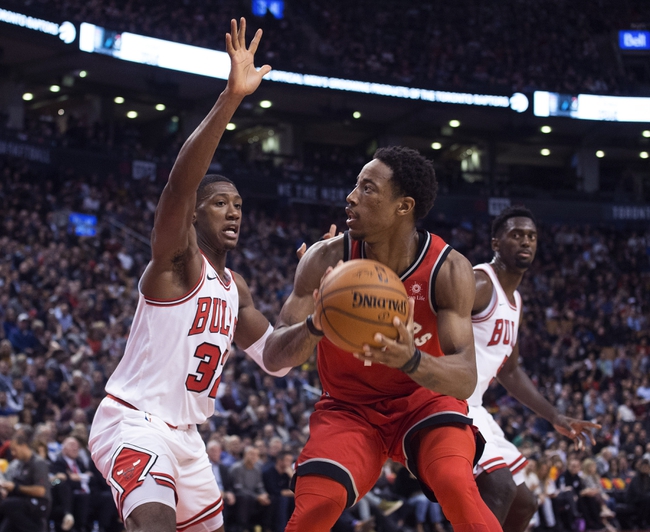 The Toronto Raptors pay a visit to the United Center to battle the Chicago Bulls on Wednesday.

The Toronto Raptors have won eight of their past 10 games and they will be gunning for a third straight victory after sneaking past the Bucks in a 131-127 overtime win on Monday. Kyle Lowry had 26 points with six assists while Serge Ibaka chipped in with 11 points on five of 19 shooting, but this game was all about DeMar DeRozan who poured in a franchise-high 52 points on 17 of 29 shooting. As a team, the Raptors shot 49 percent from the field and 14 of 33 from the three-point line but in a tightly contested game it was the Raptors who came through in overtime to improve to 25-10 overall and 14-1 at home where they’ve now won 12 in a row.

Meanwhile, the Chicago Bulls have lost four of their last seven games and they will be hoping to avoid a third straight defeat after falling to the Trailblazers by 124-120 in overtime on Monday. Kris Dunn led the team with 22 points but had eight turnovers, Lauri Markkanen added 19 points while Nikola Mirotic chipped in with 18 points and 10 rebounds in just 19 minutes off the bench. As a team, the Bulls shot 43 percent from the field and 11 of 27 from the three-point line but they just couldn’t stop the Trailblazers’ CJ McCollum who scored 25 of his 32 points after halftime. With the loss, Chicago dropped to 13-24 overall and 9-9 at home.

The Bulls have cooled off a bit since their seven-game win streak but they’re still proving to be tough to beat as their last two losses have each come by four points. The Raptors have been in great form themselves but they’ve failed to cover in their last six meetings in Chicago. I’m expecting a close game so while I’m tempted to take the Raptors, I’m sticking with the pesky Bulls and the points in a game they could easily win.