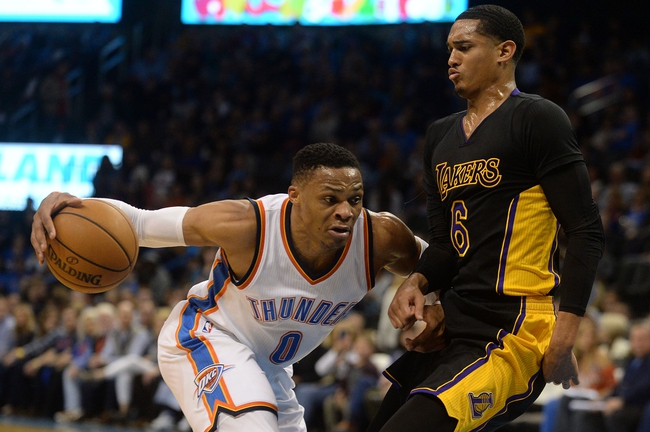 The Oklahoma City Thunder and the Los Angeles Lakers duke it out at the STAPLES Center on Wednesday.

The Oklahoma City Thunder have cooled off since their six-game win streak as they’re now hoping to avoid a third straight loss after falling to the Mavericks in a 116-113 home loss on Sunday. Russell Westbrook led the team with a triple-double of 38 points with 15 rebounds and 11 assists, Paul George added 25 points while Carmelo Anthony chipped in with 21 points. As a team, the Thunder shot 48 percent from the field but they let themselves down on the defensive end as they allowed the Mavericks to shot 51 percent from the field and 15 of 34 from the three-point line. Still, the game was locked at 108-108 with 1:27 left in the game until Dennis Smith Jr. scored the final eight points to carry the Mavericks over the line. With the loss, Oklahoma City dropped to 20-17 overall and 14-6 at home.

Meanwhile, the Los Angeles Lakers haven’t been able to buy a win lately as they’ve lost seven straight and 10 of their last 11 games. On Monday, Jordan Clarkson led the team with 20 points off the bench, Julius Randle added 15 points while Brandon Ingram chipped in with 14 points as the Lakers lost to the Timberwolves by 114-96. As a team, the Lakers shot 44 percent from the field and eight of 26 from the three-point line but they never really threatened after allowing the Timberwolves to open the game on a 16-0 run. With the loss, Los Angeles dropped to 11-25 overall and 5-13 on the road. Lonzo Ball and Brook Lopez have both been cleared to practice and are currently listed as questionable for Wednesday.

The Thunder have looked so much better on offense lately with Westbrook back to collecting triple-doubles but their defense has really started to slip which is really hurting them in these close games. However, I don't see that being a problem in this game as the Lakers are in a major slump, especially at home where they have now lost seven straight. The Thunder have covered in seven of the last nine meetings and I think that trend continues in this one.