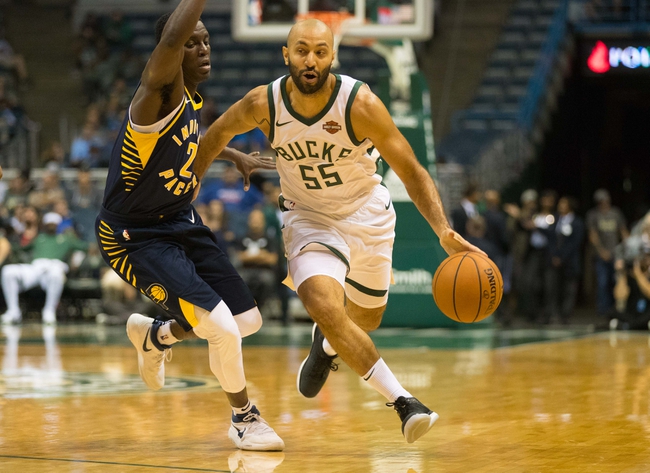 The Milwaukee Bucks play host to the Indiana Pacers at the Bradley Center on Wednesday.

The Milwaukee Bucks have won four of their past seven games but they will be looking to bounce back after falling to the Raptors in a 131-127 overtime loss on Monday. Eric Bledsoe led the team with 29 points, Giannis Antetokounmpo added 26 points with seven assists while Khris Middleton chipped in with 18 points. As a team, the Bucks shot 47 percent from the field and 13 of 27 from the three-point line but there was just no stopping the Raptors’ DeMar DeRozan who poured in a franchise-record 52 points on 17 of 29 shooting. With the loss, Milwaukee dropped to 19-16 overall and 7-10 on the road where they have now lost five of their last six.

Meanwhile, the Indiana Pacers could do with a win as they’ve lost seven of their past 10 games and they will be hoping to snap a four-game skid after falling to the Timberwolves by 107-90 on Sunday. Joe Young led the team in scoring with 20 points off the bench, Bogdan Bogdanovic added 13 points while Cory Joseph chipped in with 10 points but no other players finished in double figures. As a team, the Pacers shot just 38 percent from the field and 10 of 25 from the three-point line but they were always fighting an uphill battle after scoring just 13 points in the first quarter and things just got worse in the third quarter as the Pacers fell behind by 20 points. With the loss, Indiana dropped to 19-18 overall and 11-9 at home.

There hasn’t been any update on the availability of Victor Oladipo so he’ll likely sit out his fourth straight game with soreness in his right knee which is obviously a big loss for the Pacers who have struggled without him. With that being said, the Bucks haven’t been in the best form themselves but they’ve had three days to stew over their overtime loss to the Raptors, so I think they’ll start strong and finish with the win and cover as they’ve covered in six of their last seven games against teams with a losing record.