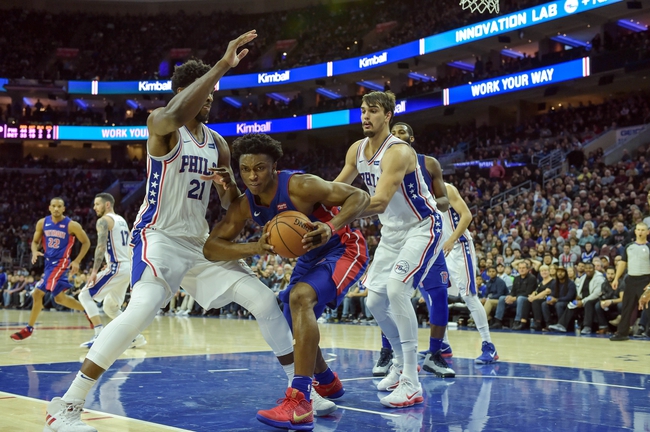 The Detroit Pistons and the Philadelphia 76ers duke it out at the Wells Fargo Centre on Friday night.

The Detroit Pistons have won six of their past nine games but they will be looking to bounce back after falling to the Heat in a 111-104 road loss on Wednesday. Tobias Harris led the team with 19 points, Reggie Bullock added 17 points while Bojan Marjanovic and Avery Bradley each scored 15 points. As a team, the Pistons shot 47 percent from the field and nine of 24 from the three-point line but in a tightly contested game, it was the Heat who came out on top, outscored the Pistons by 17-10 run in the final 6:39. Andre Drummond sat out the game with a rib injury and is listed as a game time decision for Friday.

Meanwhile, the Philadelphia 76ers have won four of their last five games and they will be gunning for a fourth straight win after taking down the shorthanded Spurs by 112-106 on Wednesday. Ben Simmons led the way with 26 points, Joel Embiid added 21 points with 11 rebounds and four assists while JJ Redick chipped in with 20 points. As a team, the 76ers shot 45 percent from the field and seven of 22 from the three-point line as hung on for the narrow win after leading by as many as 16 points in the second quarter. With the win, Philadelphia improved to 18-19 overall and 8-9 at home.

The 76ers have definitely through their struggles this season but they seemed to have gotten through that now as they've won four of their last five games. I like the way the Pistons have been flying under the radar but they were disappointing in their loss to the Heat and could again be without Drummond who is dealing with pain in his ribs. This should be a close contest so I'm tempted to take the free points, but instead I'm going to stick with the 76ers to stay on a roll with Embiid leading the way.