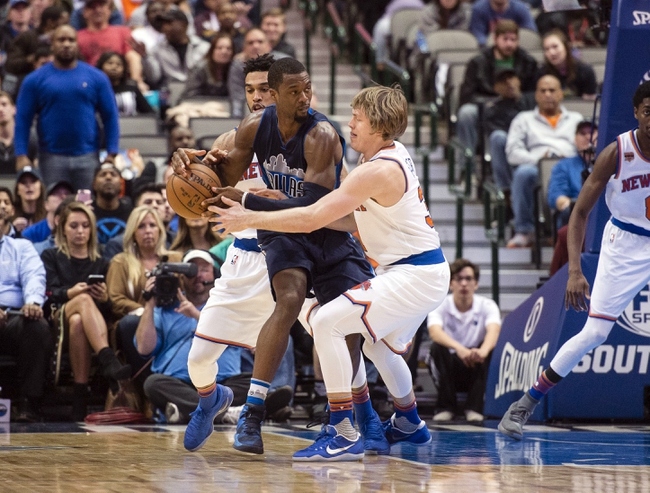 The New York Knicks and the Dallas Mavericks duke it out at the American Airlines Center on Sunday night.

The New York Knicks will take any win they can get as they’ve lost seven of their last eight games and they will be gunning to snap a three-game skid after falling to the Heat by 107-103 in overtime on Friday. Courtney Lee led the team with 24 points, Michael Beasley added 20 points with 10 rebounds off the bench while Kristaps Porzingis chipped in with 15 points. As a team, the Knicks shot 48 percent from the field while holding the Heat to just 40 percent shooting from the field, but they just couldn’t buy a bucket in the overtime period where they managed just six points. With the loss, New York dropped to 18-21 overall and 3-14 on the road where they’ve lost two straight and six of their last seven.

Meanwhile, the Dallas Mavericks have lost their second straight game since their four-game win streak as they fell to the Bulls by 127-124 on Friday. Wesley Matthews led the team with 24 points, Harrison Barnes added 23 points while Dirk Nowitzki chipped in with 19 points. As a team, the Mavs shot 53 percent from the field and 14 of 32 from the three-point line but in a tight contest, they allowed the Bulls to kick off the fourth quarter with a 10-0 run to finish with 47 points for the quarter. The Mavs just couldn’t find a way to stop Kris Dunn who scorched them for a season-high 32 points on 12 of 17 shooting. With the loss, Dallas dropped to 13-27 overall and 8-13 at home.

The Knicks have been in a major slump so it will be interesting to see how they come out after that overtime loss to the Heat. The Mavs are also coming off a tough loss of their own but they could easily be on a six-game win streak as their last two losses have each come by three points. This is a game I’d rather stay away from, but if I had to choose I’d go with the Mavericks to get the win and cover at home in this one.