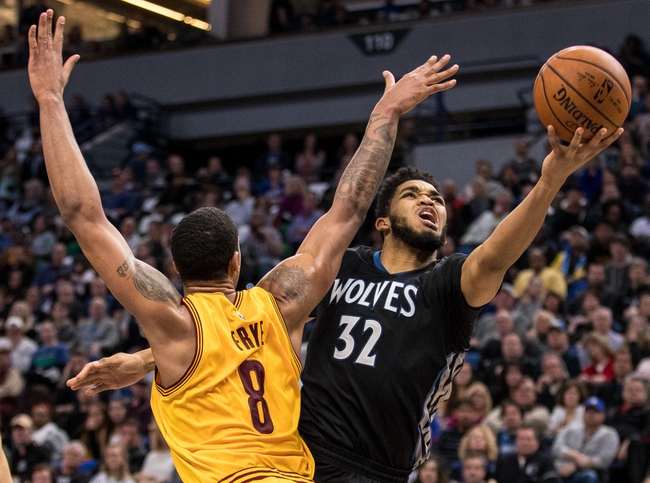 The Cleveland Cavaliers and the Minnesota Timberwolves collide at the Target Center on Monday night.

The Cleveland Cavaliers have bounced back from their three-game skid with two wins in their last three games and they will be looking to build on Saturday’s 131-127 win at Orlando. LeBron James led the way with 33 points, 10 rebounds, nine assists and six steals, Kevin Love added 27 points while Isaiah Thomas chipped in with 19 points and four assists in 21 minutes of action. As a team, the Cavaliers shot 50 percent from the field and 15 of 34 from the three-point line as they exploded for 40 points in the third quarter to take a 23-point lead before holding a late rally for the narrow win. With the win, Cleveland improved to 26-13 overall and 11-9 on the road.

Meanwhile, the Minnesota Timberwolves have split their last six games but they will be feeling pretty good after blowing past the Pelicans in a 116-98 win on Saturday. Jimmy Butler and Karl-Anthony Towns led the team with 21 points each, Andrew Wiggins added 20 points while Taj Gibson chipped in with 15 points. As a team, the Timberwolves shot 49 percent from the field and nine of 18 from the three-point line as they coasted in the second half after dominating the first half by 69-48. With the easy win, Minnesota improved to 25-16 overall and 14-6 at home.

The Cavs were able to snap out of their slump with a much-needed win in their last outing, but they only just got the job done against one of the league’s worst teams, the Magic. The Timberwolves haven’t exactly been world beaters but they’re a team on the rise and they looked great in their rout of the Pelicans. This one is a bit of a coin flip but I have to lean towards the Timberwolves at home to get the win over an inconsistent Cavs team.