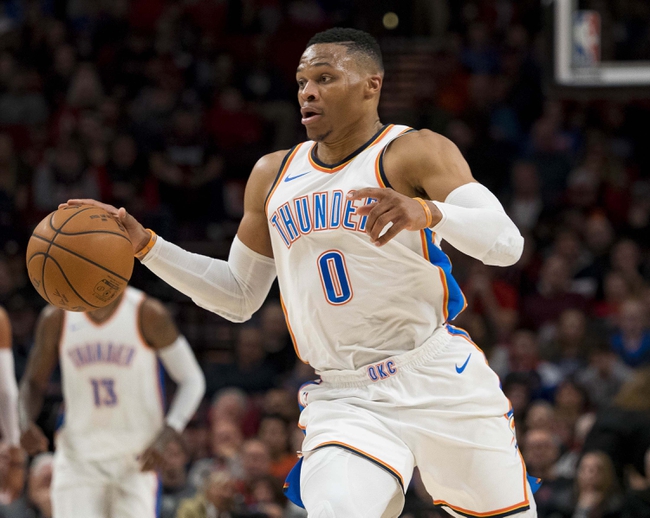 The Portland Trailblazers pay a visit to the Oklahoma City Thunder at the Chesapeake Energy Arena on Tuesday night.

The Portland Trailblazers have been in solid form as they’ve won five of their last seven games and they will be gunning for a third straight victory after sneaking past the Spurs in a 111-110 win on Sunday. CJ McCollum led the team with 25 points and seven assists, Maurice Harkless added 19 points off the bench while Jusuf Nurkic chipped in with 17 points and 13 rebounds. As a team, the Blazers shot 52 percent from the field and eight of 23 from the three-point line as they escaped with the narrow win on a 6-foot driving floater from McCollum with 0:05 left on the clock. Shabazz Napier started in place of the injured Damian Lillard and had himself 15 points with seven assists so he will likely remain in the starting lineup as Lillard has already been ruled out for Tuesday with that calf injury.

Meanwhile, the Oklahoma City Thunder have lost three of their last five games and they will be looking to bounce back after falling to the Suns in a 114-100 road loss on Sunday. Russell Westbrook led the team with a triple-double of 26 points with 10 rebounds and 11 assists, Paul George added 19 points while Steven Adams chipped in with 18 points on nine of 11 shooting. As a team, the Thunder shot 46 percent from the field and just eight of 27 from the three-point line but they just couldn’t defend the three-point shot as the Suns were allowed to shoot 17 of 39 from distance, thanks mostly to Dragan Bender who drained six treys off the bench. With the loss, Oklahoma City dropped to 22-18 on the season and 8-12 on the road.

Lillard has already been ruled out for this game which is obviously a major loss for the Blazers, but they’ve already shown they can win without him as Napier did a great job as a replacement on Sunday. I don’t see the Blazers winning this game while they’re shorthanded, but they’ve covered in nine of their last 11 road games while the Thunder have covered in just three of their last 12 home games, so I’ll be taking the Blazers with the points in what should be a close one.