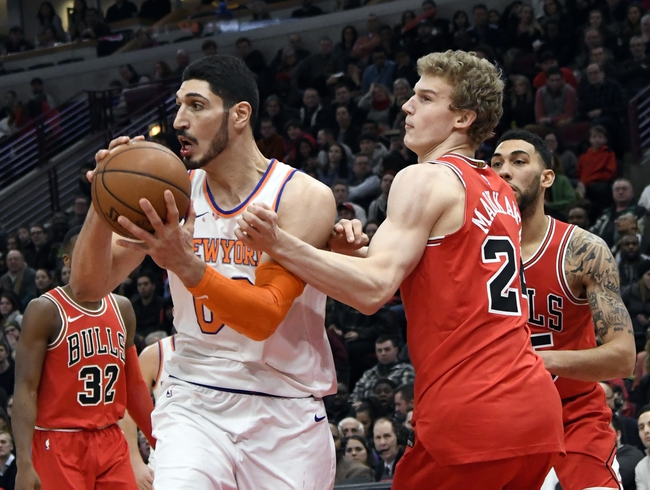 The Chicago Bulls and the New York Knicks duke it out at Madison Square Garden on Wednesday night.

The Chicago Bulls have been in a slump as they’ve lost five of their last six games and they will be hoping to avoid a third straight defeat after falling to the Rockets in a 116-107 home loss on Monday. Bobby Portis led the team with 22 points off the bench, Kris Dunn and Danzel Valentine each scored 19 points while Lauri Markkanen chipped in with 16 points. As a team, the Bulls shot 46 percent from the field and 12 of 28 from the three-point line but they were always fighting an uphill battle after allowing the Rockets to shoot eight of 13 from the three-point line in the first quarter to take an early 21-point lead, but the Bulls showed great fight to cut into the lead and stay in the game, but in the end they left themselves too much ground to make up as they fell to 14-27 on the season and 9-11 at home. Zach LaVine is expected to make his season debut as he looks to have recovered from the ACL injury.

Meanwhile, the New York Knicks have lost seven of their last nine games and they will be feeling much better after snapping a three-game skid with a 100-96 win at Dallas on Sunday. Kristaps Porzingis led the team with 29 points on nine of 25 shooting, Kyle O’Quinn added 15 points and 11 rebounds off the bench while Enes Kanter chipped in with 13 points and 18 rebounds. As a team, the Knicks shot 46 percent from the field and six of 16 from the three-point line but with the game tied with just 31.2 seconds left on the clock, it was Jarrett Jack who sunk the game-winning floater. With the much-needed win, New York improved to 19-21 overall and 4-14 on the road where they have lost six of their last eight.

Both teams have been struggling lately and you could say the same for the Knicks who have lost seven of their last nine games. The Knicks have already beaten the Bulls twice in December but both games were decided by a combined seven points so I’m expecting another close contest. With that being said, I think the points will come in handy so I’m taking the Bulls with the points as they have covered in eight of their last 10 road games.