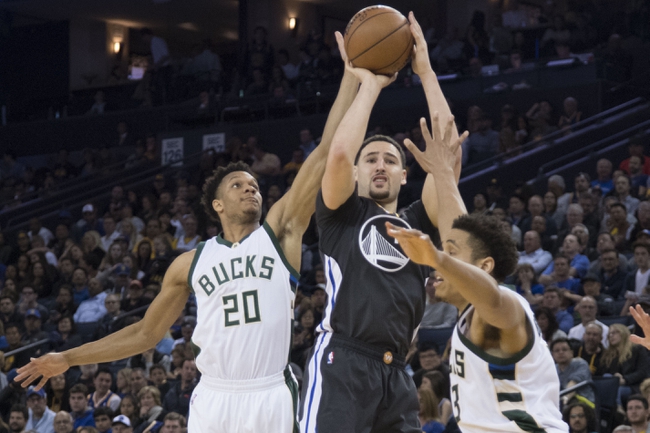 The Golden State Warriors and the Milwaukee Bucks collide at the Bradley Center on Friday night.

The Golden State Warriors have won seven of their last nine games but they will be looking to bounce back after having their five-game win streak snapped by the Clippers in a 125-106 loss on Wednesday. Coach Steve Kerr decided to rest Klay Thompson and Stephen Curry sprained his ankle in warmups so it was up to the rest of the team to pick up the slack. Kevin Durant poured in 40 points on 14 of 18 shooting, while Zaza Pachulia chipped in with 12 points, but no other Warriors player finished in double figures in scoring. As a team, the Warriors shot 48 percent from the field and eight of 23 from the three-point line but the game turned in the third quarter where the Clippers’ Lou Williams poured in 27 of his career-high 50 points. The Warriors were just unable to stay with the Clippers who outscored them by 67-44 in the second half. With the loss, Golden State fell to 33-9 on the season and 16-6 at home.

Meanwhile, the Milwaukee Bucks have split their last six games and they will be looking to build on Wednesday’s 110-103 win over the lowly Magic. Giannis Antetokounmpo led the tema with 26 points, Khris Middleton added 22 points while Eric Bledsoe chipped in with 15 points. As a team, the Bucks shot a sizzling 55 percent from the field but just four of 19 from the three-point line as they dominated the struggling Magic for three quarters before pulling their starters in the fourth quarter. It was a much more one-sided game than the final score suggests, but the bottom line is that the win elevates the Bucks to 22-18 on the season and 14-7 at home.

The news is that Curry was able to go through practice on Thursday so he is likely to suit up on Friday which is obviously great news for the Warriors who will be eager to bounce back from a rare loss. Thompson is also expected to suit up after being rested on Wednesday. These two teams have yet to meet this season, but the road team has covered in 11 of the last 16 meetings and I think that trend will continue in this one.