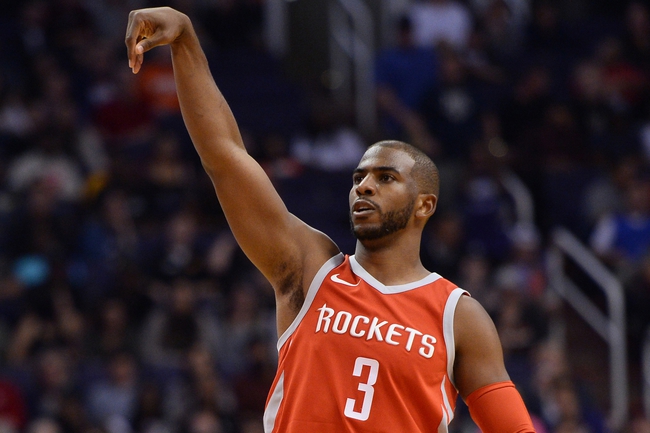 The Houston Rockets and the Phoenix Suns duke it out at the Talking Stick Resort Arena on Friday night.

The Houston Rockets have won four of their last six games and they will be gunning for a third straight victory after taking down the Trailblazers in a 121-112 home win on Wednesday. Chris Paul led from the front with a season-high 37 points, seven rebounds and 11 assists, Eric Gordon added 30 points while Clint Capela and Tarik Black scored 13 points apiece. As a team, the Rockets shot 45 percent from the field and 12 of 38 from the three-point line as they improved to 3-2 in their five games without James Harden who is expected to be out at least another two weeks with a hamstring injury. With the win, Houston improved to 29-11 overall and 15-6 at home.

Meanwhile, the Phoenix Suns have actually been in decent form as they’ve won four of their last seven games and they will be feeling pretty confident following their 114-100 home win over the Thunder on Sunday. Devon Booker led the team with 26 points, TJ Warren added 23 points, Dragan Bender scored 20 points while Josh Jackson chipped in with 17 points, 10 rebounds and five assists in his best game so far. As a team, the Suns shot 44 percent from the field but they finished with a season-best 17 of 39 from the three-point line as they easily took down the Thunder despite a triple-double from Russell Westbrook. With the win, Phoenix improved to 16-26 overall and 8-14 at home.

These two teams have met just once this season and it was the Rockets who rolled to a 142-116 win behind 48 points from Harden. The Suns have been playing some of their best basketball of the season lately and they will be looking for revenge after getting embarrassed in their last meeting, but with CP3 at the helm, I still like the Rockets to get the win and cover on the road.