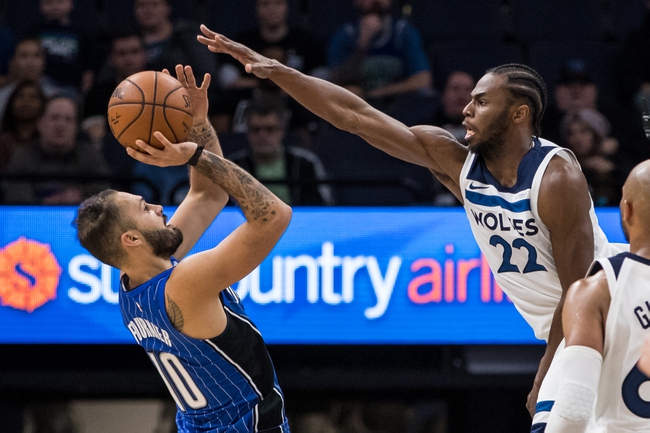 The Minnesota Timberwolves and the Orlando Magic duke it out at the Amway Center on Tuesday night.

The Minnesota Timberwolves have been on a roll as they’ve won 12 of their last 15 games and they will be gunning for a sixth straight victory after blowing past the Trailblazers in a 120-103 rout on Sunday. Jimmy Butler led the way with 24 points and he had plenty of help as Jeff Teague added 22 points with eight assists while Karl-Anthony Towns finished with a double-double of 20 points with 11 rebounds. As a team, the Timberwolves shot 53 percent from the field and seven of 19 from the three-point line but what was really impressive was their defense, particularly in the second quarter where they outscored the Trailblazers by 26-10 to take control of the game before cruising in the second half. With the win, Minnesota improved to 29-16 overall and 18-6 at home where they have now won eight in a row.

Meanwhile, the Orlando Magic’s horror season continued on Friday as they fell to the Wizards by 125-119 for their 15th loss in their last 16 games. Elfrid Payton led the team with 27 points and eight assists, Jonathan Simmons added 23 points with five assists, Bismack Biyombo scored 21 points with 13 rebounds while Aaron Gordon racked up 14 points with 10 rebounds and seven assists. As a team, the Magic shot 51 percent from the field and 12 of 29 from the three-point line but it still wasn’t enough to get past the Wizards as they managed just 21 points in the fourth quarter. Defensively, the Magic could do little to slow down the Wizards who were allowed to shoot 57 percent from the field thanks mainly to the backcourt duo of John Wall and Bradley Beal who scored 30 points each. With the loss, Orlando dropped to 12-31 overall and 5-19 on the road where they are currently riding a 10-game skid.

Here we have two teams headed in opposite directions as the Timberwolves have won each of their last five games by double digits, while the Magic haven’t won a game since Dec 28. The road team has covered in each of the last six meetings and I don’t see that trend changing in this one as the Timberwolves are just red-hot at the moment, while the Magic just can’t buy a win these days.