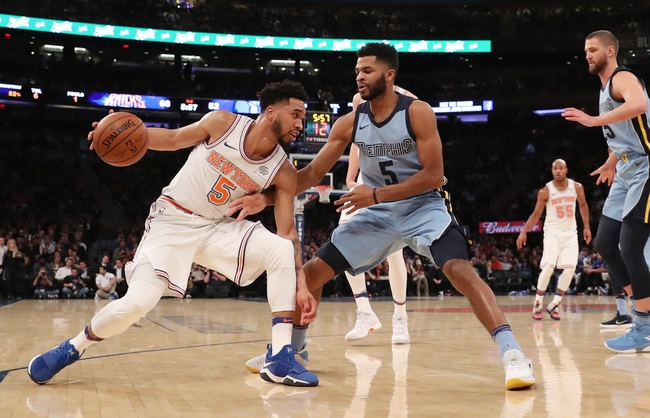 The New York Knicks and the Memphis Grizzlies collide at the FedExForum on Wednesday night.

The New York Knicks have lost six of their past eight games but they will be feeling a little better after snapping a three-game skid with a 119-104 win at Brooklyn on Monday. Kristaps Porzingis led the team with 26 points on eight of 14 shooting, Michael Beasley added 23 points and 10 rebounds off the bench while Doug McDermott chipped in with 13 points. As a team, the Knicks shot 51 percent from the field and nine of 16 from the three-point line while holding the Nets to just 36 percent shooting, but they didn't have it easy until the fourth quarter where they rallied to outscore the Nets by 36-23. With the win, New York improved to 20-24 overall and 5-15 on the road where they have split their last six games.

Meanwhile, the Memphis Grizzlies have lost three of their last five games but they will be looking to build on Monday's 123-114 home win over the Lakers who were without Brandon Ingram and Lonzo Ball. Dillon Brooks led the team with 19 points, Marc Gasol added 17 points while Tyreke Evans racked up 15 points with nine rebounds and 12 assists. The Grizzlies actually had eight players finish in double figures as they shot a healthy 51 percent from the field and 10 of 22 from the three-point line as a team. With the win, Memphis improved to 14-28 overall and 9-13 at home where they have won three of their last four games.

The Grizzlies really made it look easy in their win over the Lakers, but it's hard to get too excited about that as the Lakers are a young team who were missing two key players in Ball and Ingram. I could say the same thing about the Knicks who had to rally in the fourth quarter to beat the Nets in their last outing. The Grizzlies have already beaten the Knicks back on Dec 6 and I'm expecting a similar result as the Grizzlies have covered in five of the last six meetings in Memphis.