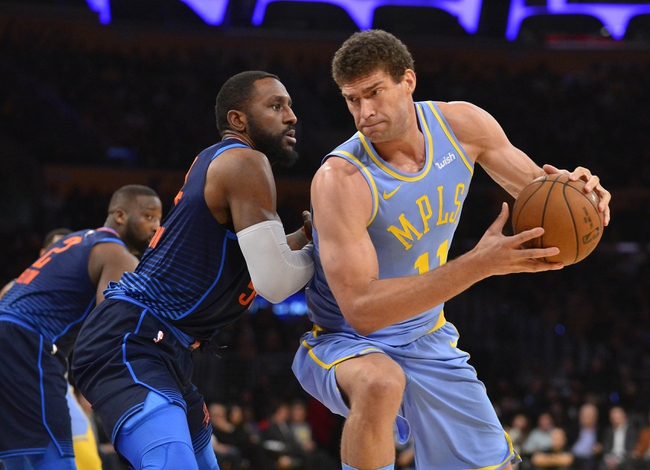 The Oklahoma City Thunder play host to the Los Angeles Lakers at the Chesapeake Energy Arena on Wednesday night.

The Los Angeles Lakers have been on a bit of a tear lately as they were enjoying a four-game win streak before falling to the Grizzlies by 123-114 on Monday. Kentavious Caldwell-Pope led the team with 27 points, Kyle Kuzma added 18 points off the bench while Josh Hart chipped in with 16 points. As a team, the Lakers shot just 39 percent from the field and 12 of 35 from the three-point line but they were fighting an uphill battle after falling behind by 20 points heading into the fourth quarter. Lonzo Ball sat out the game with a knee injury and isn't expected to be ready as he did not participate in Tuesday's practice while Brandon Ingram sat out the game with an ankle injury, but he is listed as probable for Wednesday. With the loss, Los Angeles dropped to 15-28 overall and 6-14 on the road.

Meanwhile, the Oklahoma City Thunder have won four of their last seven games and they will be gunning for a third straight victory after taking down the Kings in a 95-88 home win on Monday. Carmelo Anthony led hte team with 20 points, Russell Westbrook added 19 points with 16 rebounds and nine assists while Paul George added 18 points with four assists and five steals. As a team, the Thunder shot just 42 percent from the field and nine of 30 from the three-point line but they took control of the game in the third quarter where they outscored the Kings by 31-16 before cruising in the fourth. With the win, Oklahoma City improved to 24-20 overall and 15-7 at home where they had actually lost three in a row before Monday's win.

The Lakers have been playing much better lately, but they really struggled without their leading scorer on Monday. The good news is that Ingram is expected to be available for this game. With that being said, the betting trends are heavily in favor of the Thunder so I still have them winning this game at home, but if Ingram is indeed fit to play, I'll be taking the Lakers with the double-digit start for sure.