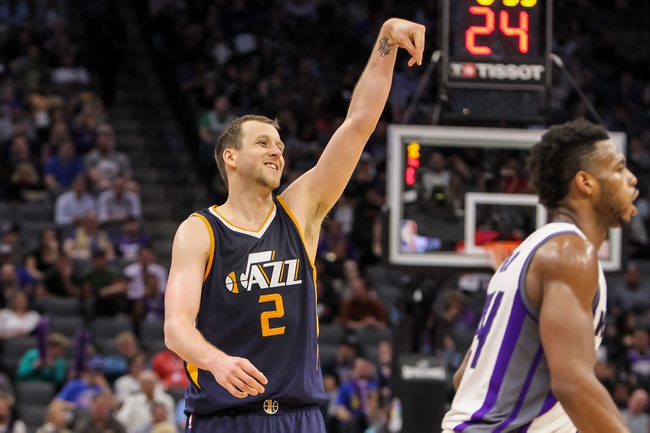 The Utah Jazz pay a visit to the Sacramento Kings at the Golden 1 Center on Wednesday night.

The Utah Jazz have lost eight of their past 10 games and they will be hoping to avoid a third straight loss after getting blown out by the Pacers in a 109-94 home loss on Monday. Donovan Mitchell led the way with 23 points on eight of 16 shooting, Derrick Favors added 16 points while Rodney Hood chipped in with 15 points off the bench but no other Jazz player scored more than eight points. As a team, the Jazz shot just 44 percent from the field and nine of 33 from the three-point line and they never really threatened after falling behind by as many as 23 points late in the third quarter. Ricky Rubio scored just two points on one of seven shooting while Joe Ingles finished scoreless after 20 minutes of action. With the loss, Utah fell to 17-26 on the season and 13-8 at home where they have now lost three of their last four.

Meanwhile, the Sacramento Kings have been in a major slump as they've lost eight of their last nine games and they will be hoping to snap a five-game skid after falling to the Thunder in a 95-88 road loss on Monday. Buddy Hield led the team with 16 points and four assists of the bench, Willie Cauley-Stein added 15 points while D'Aaron Fox chipped in with 12 points and five assists. As a team, the Kings shot just 40 percent from the field and seven of 29 from the three-point line as they took a six-point lead going into halftime before the Thunder took over in the third quarter where they were outscored by 31-16. There was just no stopping the Thunder's Russell Westbrook who racked up 19 points with 16 rebounds and nine assists. With the loss, Sacramento dropped to 13-30 on the season and 6-17 on the road where they have now lost four in a row.

You wouldn't be confident betting on either team in this game the way they've been playing, but the silver lining is that someone is leaving with a much-needed win. The Jazz have only covered in three of their last 10 games overall while the Kings have only covered in one of their last six home games, so without much confidence, I'm leaning towards the Jazz to get the win and cover in this one.