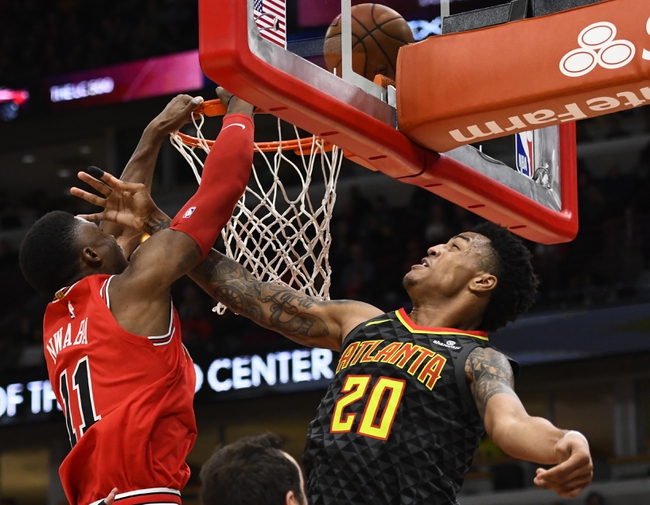 The Atlanta Hawks play host to the Chicago Bulls at the Philips Arena on Saturday night.

The Chicago Bulls have won four of their last seven games but they will be looking to bounce back after having their three-game win streak snapped by the Warriors in a 119-112 home loss on Wednesday. Nikola Mirotic led the team with 24 points off the bench, Robin Lopez and Kris Dunn each scored 16 points while Bobby Portis chipped in with 12 points and four assists. As a team, the Bulls shot 42 percent from the field and 10 of 39 from the three-point line but despite pouring in 40 points in the first quarter, the Bulls weren’t able to hang with the Warriors in the decisive third quarter where they were outscored by 32-12.

Meanwhile, the Atlanta Hawks have actually been playing some of their best basketball of the season lately as they’ve now won three of their last four games after beating the Pelicans by 94-93 on Wednesday. Kent Bazemore led the team with 20 points and five assists, John Collins added 18 points off the bench while Dennis Schroder finished with a double-double of 13 points with 15 assists. As a team, the Hawks shot just 41 percent from the field and 10 of 40 from the three-point line but their defense kept them in the game as they rallied back from a 19-point deficit to win the game on the back of a clutch game-winner from Bazemore. With the win, Atlanta improved to 13-31 overall and 9-12 at home.

These two teams last met on Oct 26 and it was the Bulls who won by 91-86 with a balanced scoring effort as six players finished in double figures. You really couldn’t back either team with much confidence in this game, but the Hawks have actually been playing well lately and I think they will be good enough to get the win here while the Bulls are shorthanded.