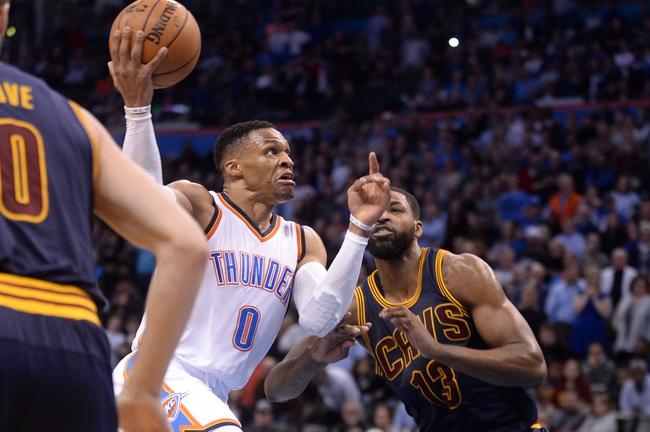 The Oklahoma City Thunder and the Cleveland Cavaliers duke it out at the Quicken Loans Arena on Saturday.

The Oklahoma City Thunder have won five of their last eight games and they will be gunning for a fourth straight victory after blowing past the Lakers in a 114-90 home win on Wednesday. Carmelo Anthony led the team with 27 points on 10 of 15 shooting, Steven Adams added 21 points with 10 rebounds while Russell Westbrook racked up 19 points with seven assists. As a team, the Thunder shot 48 percent from the field and 12 of 35 from the three-point line as they led by six points at halftime before putting the game out of reach with a 33-18 third quarter. The Thunder dominated the Lakers on the boards by 54-30 thanks to a total of 21 offensive boards. With the win, Oklahoma City improved to 25-20 overall and 16-7 at home where they have won two straight.

Meanwhile, the Cleveland Cavaliers have lost eight of their last 11 games but they will be feeling a little better after snapping a four-game skid with a 104-103 win over the Magic on Thursday. Isaiah Thomas led the team with 21 points and four assists, LeBron James added 16 points with six assists while Kevin Love added 12 points and 11 rebounds. As a team, the Cavaliers shot 44 percent from the field and 10 of 34 from the three-point line as they dominated the Magic to lead by as many as 23 points before rallying late to hold on for the narrow win. With the much-needed win, Cleveland improved to 27-17 overall and 16-5 at home where they have won 13 of their last 14 games.

The Cavaliers will be breathing a little sigh of relief after putting a halt to a four-game skid with a win over the Magic, but they were hardly convincing as they blew a 23-point lead. The Thunder haven’t been in the best form themselves, but this looks like a great opportunity for them to take down the Cavaliers while they’re still going through their growing pains. I actually think the Thunder will come out on top with the win but I’ll take the points for safety.