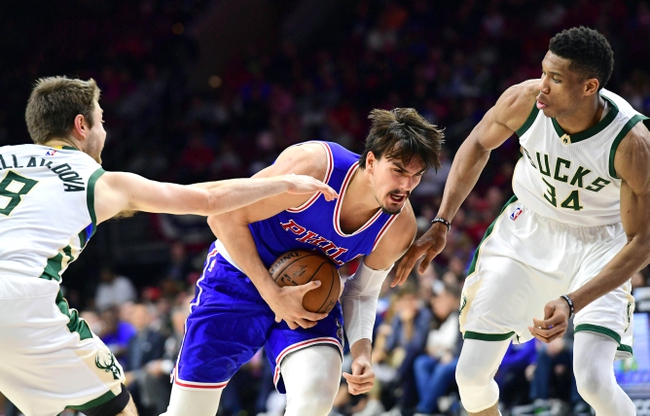 The Milwaukee Bucks pay a visit to the Philadelphia 76ers at the Wells Fargo Centre on Saturday night.

The Milwaukee Bucks have lost four of their last six games and they will be hoping to bounce back after falling to the Heat in a 106-101 loss on Wednesday. Khris Middleton led the team in scoring with 25 points on 11 of 22 shooting, Giannis Antetokounmpo added 22 points with 10 rebounds and six assists while Tony Snell chipped in with 12 points off the bench. As a team, the Bucks shot 43 percent from the field and 11 of 28 from the three-point line, but they just couldn’t find a way to stop the Heat’s Hassan Whiteside who poured in a season-high 27 points on 10 of 12 shooting to go along with six blocks. With the win, Milwaukee dropped to 23-21 overall and 14-9 at home where they have lost three of their last four.

Meanwhile, the Philadelphia 76ers have been in great form as they’ve won seven of their last nine games and they will be gunning for a third straight victory after taking down the shorthanded Celtics by 89-80 on Thursday. Joel Embiid led the way with 26 points, 16 rebounds and six assists, Dario Saric added 16 points while TJ McConnell provided the spark off the bench with 15 points. As a team, the 76ers shot 46 percent  from the field and six of 17 from the three-point line as they dominated the Celtics to lead by as many as 21 points before holding off a late rally to come away with the win to improve to 21-20 overall and 11-10 on the road.

The 76ers have been playing some of their best basketball of the season despite missing a key starter in JJ Redick. Embiid has been leading from the front and is just getting better as he is getting healthier and I think that’ll be the difference in what should be a close contest against the Bucks who have been struggled in their last six games. The 76ers have covered in six of their last seven games and I think that trend will continue tonight.