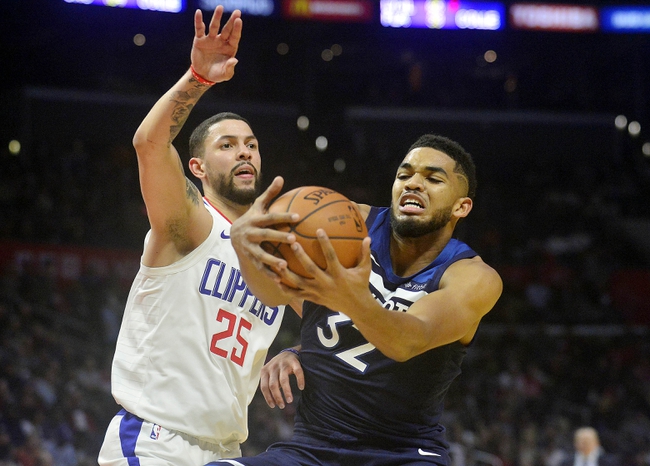 The Minnesota Timberwolves and the Los Angeles Clippers do battle at the STAPLES Center on Monday night.

The Minnesota Timberwolves have been on a bit of a tear lately as they’ve won five of their last seven games and they will be feeling pretty good after taking down the Raptors in a 115-109 home win on Saturday. Andrew Wiggins led the team with 29 points on 11 of 21 shooting, Karl-Anthony Towns added 22 points on six of seven shooting while Taj Gibson chipped in with 14 points. As a team, the Timberwolves shot 47 percent from the field and seven of 16 from the three-point line as they took control of the game with a 33-21 third quarter to lead by as many as 10 points before holding on for the narrow win. With the win, Minnesota improved to 30-18 overall and 19-6 at home where they are currently riding a nine-game win streak.

Meanwhile, the Los Angeles Clippers have been in great form as they’ve won 10 of their past 13 games but they will be hoping to bounce back after falling to the Jazz in a 125-113 road loss on Saturday which snapped their six-game win streak. Lou Williams led the team with 31 points, seven assists and 10 steals, Blake Griffin added 25 points with eight rebounds while Wesley Johnson chipped in with 17 points off the bench. As a team, the Clippers shot 44 percent from the field and 11 of 36 from the three-point line but they simply left themselves with too much ground to make up after falling behind by 76-59 at halftime. With the loss, Los Angeles dropped to 23-22 overall and 9-13 on the road where they had won three straight before Saturday.