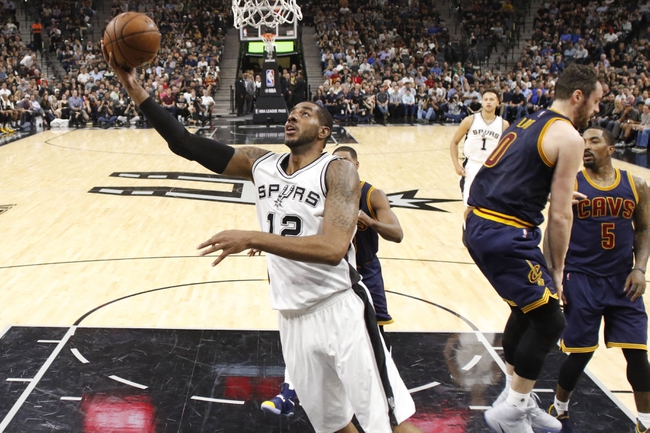 The Cleveland Cavaliers and the San Antonio Spurs do battle at the AT&T Center on Tuesday night.

The Cleveland Cavaliers have been in a major slump as they’ve now lost nine of their last 12 games and things simply went from bad to worse in Saturday’s 148-124 loss to the Thunder. Isaiah Thomas led the team with 24 points, LeBron James added 18 points with seven assists while Jae Crowder chipped in with 17 points. As a team, the Cavaliers shot a healthy 51 percent from the field and 10 of 37 from the three-point line but once again they let themselves down on the defensive end as there was just no catching the Thunder after allowing 43 points in the first quarter. With the loss, Cleveland dropped to 27-18 overall and 16-6 at home where they have now lost two of their last three.

Meanwhile, the San Antonio Spurs have lost four of their last six games and they will be hoping to avoid a third straight defeat after falling to the Pacers in a 94-86 home loss on Sunday. Pau Gasol led the team in scoring with 14 points, while Tony Parker and Bryn Forbes each chipped in with 12 points, but the Spurs needed more from LaMarcus Aldridge who scored just 10 points on five of 14 shooting. As a team, the Spurs shot 42 percent from the field and just nine of 34 from the three-point line as they struggled without Kawhi Leonard and Manu Ginobili who were both out with injuries. With the loss, San Antonio dropped to 30-18 overall and 19-3 at home.

The Cavaliers are undoubtedly in a world or disarray as their defensive woes continue to cost them games, but they know that a solid win against the Spurs would help to steady the ship. The Spurs continue to scrap together enough wins to keep them relevant but the injuries are beginning to take its toll, especially when Aldridge doesn’t score close to 30 points. This one could go either way, but I’m going to have to stick with the shorthanded Spurs over the Cavaliers who have been terrible on the road lately.