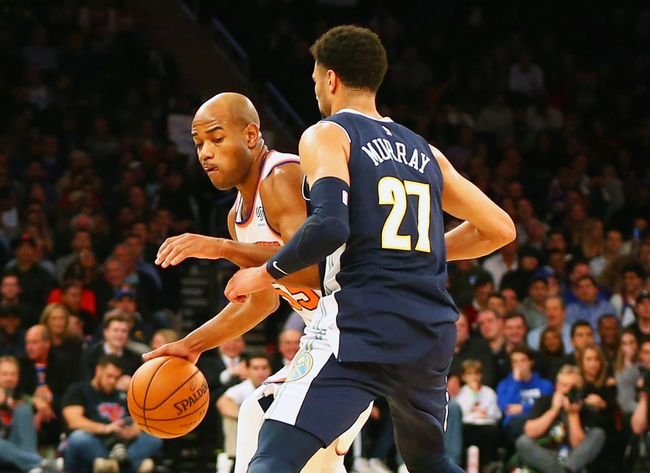 The New York Knicks and the Denver Nuggets duke it out at the Pepsi Center on Thursday night.

The New York Knicks have lost nine of their past 12 games and they will be hoping to avoid a third straight defeat after falling to the Warriors in a 123-112 loss at Golden State on Tuesday. Michael Beasley led the team with 21 points on eight of 15 shooting, Courtney Lee added 20 points while Enes Kanter chipped in with 16 points. As a team, the Knicks shot a healthy 51 percent from the field and nine of 22 from the three-point line as they dominated early to lead by 10 points, but the Warriors outscored them by 74-55 in the second and third quarters combined to run away with the game. With the loss, New York dropped to 21-27 overall and 6-18 on the road. Kristaps Porzingis sat out the game with a knee injury and is considered questionable for Thursday.

Meanwhile, the Denver Nuggets have lost six of their past nine games but they will be feeling a little better after taking down the Trailblazers in a 104-101 home win on Monday. Jamal Murray exploded for 38 points on 14 of 19 shooting, Nikola Jokic added 16 points with 12 rebounds and five assists, while Gary Harris chipped in with 13 points. As a team, the Nuggets shot just 41 percent from the field and 10 of 30 from the three-point line but they were able to rely on their defense in the final 3:39 of the game where they closed the game on a 14-6 run. With the win, Denver improved to 24-23 overall and 17-6 at home.

The Knicks put together a valiant effort to hang with the Warriors in their last outing, but without Porzingis they just didn’t have the firepower to get over the line and I’m worried the same could happen in this one. The Nuggets certainly haven’t been in great form but they were able to steady the ship with a nice home win on Monday and I think they’ll be able to carry that momentum into this one.