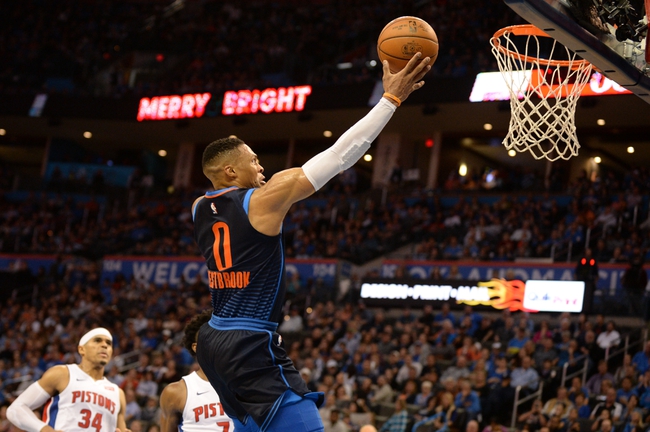 The Oklahoma City Thunder pay a visit to Little Caesars Arena to take on the Detroit Pistons on Saturday night.

The Oklahoma City Thunder have been on tear lately and they will be gunning for  seventh straight victory after blowing past the Wizards in a 121-112 home win on Thursday. Russel Westbrook led the way with a season-high 46 points on 19 of 29 shooting, Paul George added 18 points on six of 19 shooting while Carmelo Anthony chipped in with 13 points and eight rebounds. As a team, the Thunder shot 51 percent from the field and they were great on the defensive end as they forced the Wizards into a total of 23 turnovers which led to 36 points. With the win, Oklahoma City improved to 28-20 overall and 18-7 at home where they have won four straight.

Meanwhile, the Detroit Pistons have been in a major slump as they’ve won just two of their last 11 games and they will be hoping to snap an ugly six-game skid after falling to the Jazz by 98-95 in overtime on Wednesday. Andre Drummond led the team with a monster night of 30 points and 24 rebounds, Ish Smith added 14 points off the bench while Tobias Harris chipped in with 13 points on six of 17 shooting. As a team, the Pistons shot just 39 percent from the field and seven of 31 from the three-point line, but they were actually leading by nine points late in the fourth quarter before the Jazz rallied to force overtime. With the disappointing loss, Detroit dropped to 22-24 overall and 13-9 at home where they have lost four straight.

The Thunder own an unimpressive 10-13 road record this season, but they’ve covered in five of their last seven road games and are simply one of the hottest teams in the league at the moment. Meanwhile, the Pistons are in a major funk in the moment, especially at home where they’ve lost four straight. These two teams last met on Nov 24 and it was the Pistons who won by 99-98, but I think the Thunder get their revenge in this one as they finish with the win and cover.