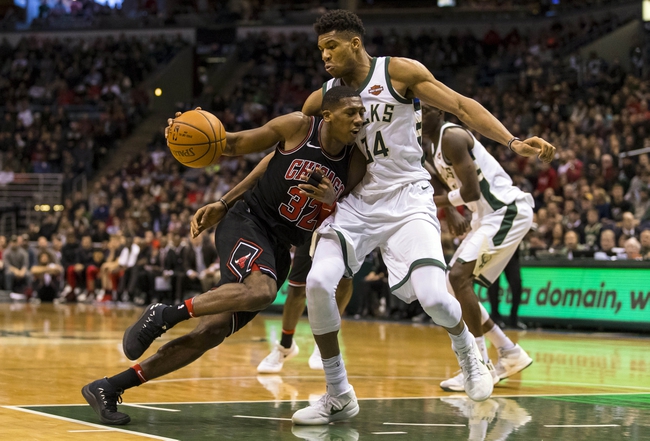 The Milwaukee Bucks invade the United Center to duke it out with the Chicago Bulls on Sunday afternoon.

The Milwaukee Bucks have lost four of their last seven games but they will be gunning for a third straight victory after blowing past the Nets in a 116-91 rout on Friday. Giannis Antetokounmpo led the team with 41 points, 13 rebounds and seven assists, Khris Middleton added 21 points on nine of 14 shooting while Eric Bledsoe chipped in with 14 points. As a team, the Bucks shot 52 percent from the field and 12 of 23 from the three-point line as they stormed out to a 29-10 run in the first quarter to all but secure the win before halftime. With the easy win, Milwaukee improved to 25-22 overall and 16-9 at home.

Meanwhile, the Chicago Bulls have been in a bit of a slump as they’ve lost four of their last five games and they will be hoping to snap a three-game skid after falling to the Lakers in a 108-103 home loss on Friday. Nikola Mirotic led the team in scoring with 18 points while Bobby Portis and Danzel Valentine each scored 16 points, but the Bulls needed more from their starting lineup as no starter scored more than Lauri Markkanen’s 11 points. As a team, the Bulls shot just 37 percent from the field and 17 of 36 from the three-point line but they did show plenty of fight late in the game as they fell just short after rallying back from a 12-point deficit in the fourth quarter. With the loss, Chicago dropped to 18-31 overall and 11-13 at home where they have lost two straight.

These two squads have already met twice this season with the Bulls winning on each occasion by single digits. However, the Bulls have really fallen off the pace lately as they just haven’t been able to come out on top in these close games, so I’m going with the improving Bucks in this one as the road team has covered in each of the last five meetings between these two teams.