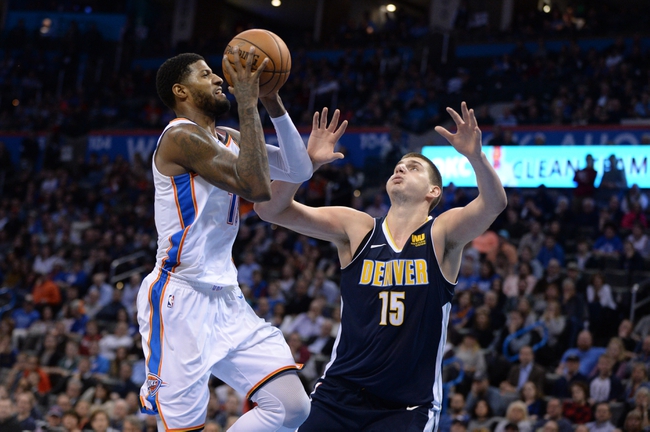 The Oklahoma City Thunder and the Denver Nuggets duke it out at the Pepsi Center on Thursday night.

The Oklahoma City Thunder have been in great form lately but they will be looking to bounce back after having their eight-game win streak snapped by the shorthanded Wizards in a 102-96 road loss on Tuesday. Paul George led the way with 28 points on eight of 14 shooting, Carmelo Anthony added 19 points on seven of 21 shooting while Russell Westbrook scored 13 points with 10 assists but shot just five of 18 from the field while committing seven turnovers.  As a team, the Thunder shot just 37 percent from the field and nine of 32 from the three-point line but they fell just short as the Wizards closed the game on a 6-0 run in the final 39 seconds to snatch the victory. With the loss, Oklahoma City dropped to 30-21 overall and 11-14 on the road.

Meanwhile, the Denver Nuggets have split their last 10 games and they will be hoping to avoid a third straight loss after getting edged out by the Spurs in a 106-104 road loss on Tuesday. Six players finished in double figures in scoring as Jamal Murray led the team with 18 points while Gary Harris added 17 points. As a team, the Nuggets shot 46 percent from the field and 10 of 23 from the three-point line, but despite playing on the second night of a back to back set, the Nuggets really took it to the Spurs until the last play of the game where Will Barton missed on the game-winner with time expiring. With the loss, Denver dropped to 26-25 overall and 7-18 on the road where they have lost six in a row.

In pretty much a pick em game, I'm siding with the better team in the Oklahoma City Thunder, a team that's had its hiccups but is starting to tap into their potential with more consistent play. The Denver Nuggets just can't get out of their own way and have lost eight of the last 10 meetings against OKC. Thunder should win this game on the road.