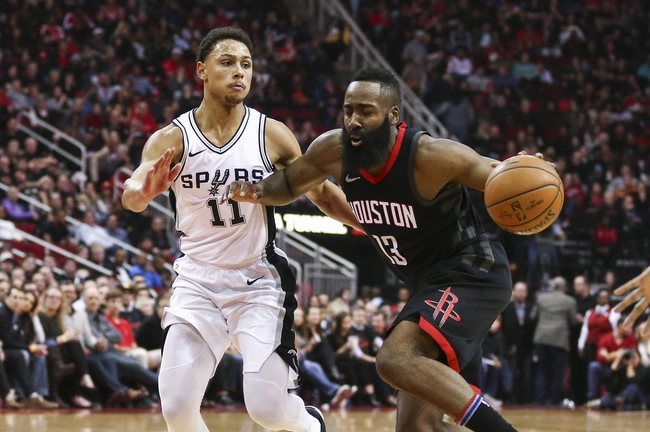 The Houston Rockets pay a visit to the AT&T Center to battle the San Antonio Spurs on Thursday.

The Houston Rockets have been in fine form as they’ve won nine of their past 11 games and they will be aiming for a third straight win after taking down the Magic in a 114-107 home win on Tuesday. Clint Capela scored 12 points with 13 rebounds while Gerald Green chipped in with 11 points, but with Chris Paul sitting out with a groin injury and Eric Gordon leaving in the second quarter with lower back stiffness, it was up to James Harden to pick up the slack and he delivered with the league’s first ever 60-point triple-double. As a team, the Rockets shot 50 percent from the field and 13 of 35 from the three-point line but this game was far from easy as the scores were actually tied with less than 2 minutes on the clock until the Rockets closed the game on a 7-0 run. With the win, Houston improved to 36-13 overall and 20-6 at home.

Meanwhile, the San Antonio Spurs have won four of their last five games and they will be gunning for a third straight win after sneaking past the Nuggets in a 106-104 home win on Tuesday. LaMarcus Aldridge led the team with 30 points on 14 of 23 shooting, Kyle Anderson and Pau Gasol each scored 18 points while Manu Ginobili chipped in with 14 points and four assists off the bench. As a team, the Spurs shot 50 percent from the field while matching a season high with 33 assists as they escaped with narrow win in a game with 18 lead changes. With the win, San Antonio improved to 34-19 overall and 22-4 at home.

Head to head, the road team is 9-3 ATS in their last 12 meetings, the over is 5-2-1 in the last eight meetings and the Rockets are 4-1 ATS in the last five meetings in San Antonio.

It's always tough to turn down free points with the Spurs, but the Spurs haven't exactly been the Spurs we're used to seeing this season, as injuries have played a big role in the inconsistent play. The Rockets prove nightly that they're a legit title contender and when they win, they usually win big. Not to mention Houston smoked the Spurs when they met back in December. Gladly lay the bucket with the better and healthier team.