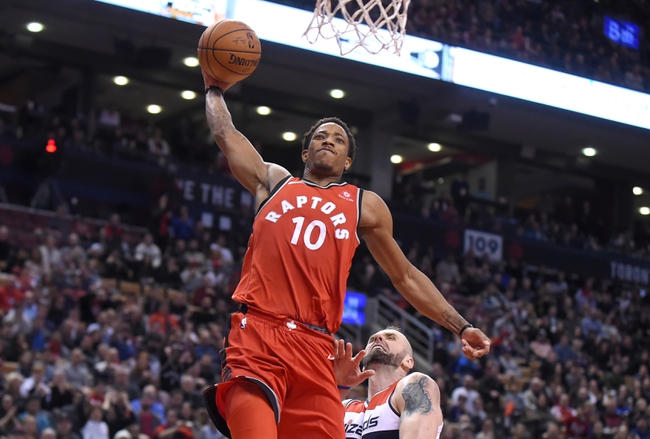 The Washington Wizards play host to the Toronto Raptors at the Capital One Arena on Thursday night.

The Toronto Raptors have been in solid form as they’ve won five of their last seven games and they will be gunning for a third straight victory after taking down the Timberwolves in a 109-104 home win on Tuesday. DeMar DeRozan led the team in scoring with 23 points and eight assists, Jonas Valanciunas added 18 points with 11 rebounds while Serge Ibaka and Kyle Lowry each scored 15 points. As a team, the Raptors shot 48 percent from the field and nine of 29 from the three-point line as they dominated the second half by 58-47 to overcome to run away with the victory after trailing by as many as 13 points in the second quarter. With the win, Toronto improved to 34-15 overall and 19-4 at home where they have won two straight and four of their last five.

Meanwhile, the Washington Wizards have lost four of their last seven games but they will be aiming for a third straight victory after edging out the Thunder in a 102-96 home win on Tuesday. Otto Porter Jr led the team in scoring with 25 points on eight of 13 shooting, Bradley Beal added 21 points with nine assists while Markieff Morris chipped in with 18 points and four assists. As a team, the Wizards shot just 38 percent from the field and seven of 25 from the three-point line but this game was close right until the final 39 seconds where the Wizards closed the game on a 6-0 run to come out on top. With the win, Washington snapped the Thunder’s eight-game win streak to improve to 28-22 overall and 16-9 at home.

Head to head, the road team is 4-1 ATS in the last five meetings, the under is 7-2 in the last nine meetings and the Raptors are 5-2 ATS in their last seven meetings overall.

The Wizards really took it to the Thunder in their last outing and were able to pull out a nice team win without John Wall which will certainly give them confidence going forward, but it’s going to be tough to replicate that performance against the Raptors who have covered in five of the last seven meetings. Neither team have been reliable ATS lately, but I have to lean towards the Raptors to take advantage of the shorthanded Wizards in this one.