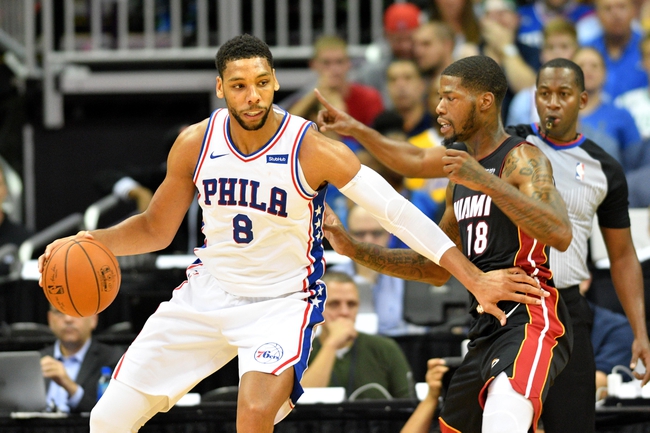 The Miami Heat and the Philadelphia 76ers do battle at the Wells Fargo Center on Friday night.

The Miami Heat have lost five of their past eight games and they will be hoping to bounce back after falling to the Cavaliers in a 91-89 road loss on Wednesday. Goran Dragic led the team with 18 points and six assists, Josh Richardon added 15 points while Tyler Johnson chipped in with 11 points. As a team, the Heat shot just 43 percent from the field and a miserable three of 28 from the three-point line but their defense kept in the game as they held the Cavaliers to just 35 percent shooting from the field and six of 26 from beyond the arc. Unfortunately, the Heat managed just 17 points in the fourth quarter in a game that was closely contested throughout. With the tough loss, Miami dropped to 29-22 overall and 16-12 on the road.

Meanwhile, the 76ers have won five of their past nine games but they will be hoping to avoid a fourth straight defeat after falling to the Nets in a 116-108 road loss on Wednesday. Joel Embiid led the team with 29 points, 14 rebounds and two assists, Ben Simmons added 24 points with seven assists on 11 of 16 shooting while JJ Redick chipped in with 20 points. As a team, the 76ers shot 47 percent from the field and seven of 18 from the three-point as they battled for three close quarters until the Nets pulled away in the fourth quarter with a decisive 11-0 run. With the loss, Philadelphia dropped to 24-24 overall and 12-14 on the road where they have lost their last three.

The Heat haven’t been in great form but a win over the Cavaliers would have changed their mood had they got the job done on Wednesday. The 76ers will be happy to be home after losing three straight on the road but they’re going to need more from their role players as Embiid and Simmons are already putting up big numbers without success. The home team has covered in each of the last four meetings but the Heat have covered in their last four road games so this is should be a close one. With that being said, I’m taking the Heat with the handful of points against the 76ers who are in a bit of a slump at the moment.