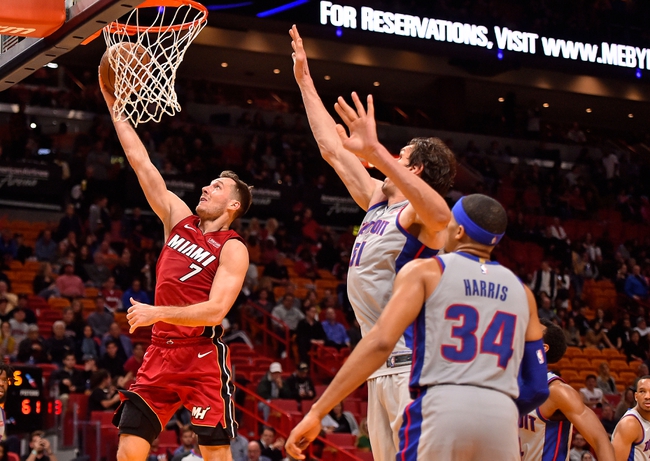 The Miami Heat travel to Little Caesars Arena to battle the Detroit Pistons on Saturday.

The Miami Heat have lost four of their last six games and they will be hoping to avoid a third straight defeat after last night’s 103-97 loss at Philadelphia. The starters for the Heat combined for just 40 points with Goran Dragic finishing with just 10 points, but Kelly Olynyk led the team in scoring with 19 points, while Bam Adebayo racked up 15 points with 13 rebounds and six assists. However, despite pouring in 37 points in the fourth quarter, the Heat got close than four points after trailing by as many as 28 points. With the loss, Miami dropped to 29-23 overall and 16-13 on the road where they’ve now lost two straight and three of their last four.

Meanwhile, the Detroit Pistons were in a world of hurt during their eight-game losing streak but things have changed for the better as the Pistons are now aiming for a third straight win following Thursday’s 104-102 win over the Grizzlies. Blake Griffin racked up 24 points with 10 rebounds and five assists in his debut game for the Pistons, Reggie Bullock added 15 points while Andre Drummond chipped in with 14 points, 15 rebounds and three assists. As a team, the Pistons shot 46 percent from the field and seven of 25 from the three-point line as they narrowly escaped with the win as the Grizzlies actually had a shot to win it at the end. With the win, Detroit improved to 24-26 overall and 15-10 at home.

The Heat have really struggled in their last couple of road games and last night was complete blowout until the reserves made the most of garbage time. With that being said, the Pistons haven’t been playing much better as they only just got the win over the Grizzlies but I like the inclusion of Griffin to the Pistons’ frontcourt. I’m expecting a close one but the home team has covered in each of the last four meetings and the I think that trend continues tonight as the Pistons get the win and cover against the Heat who will be playing on zero days' rest.