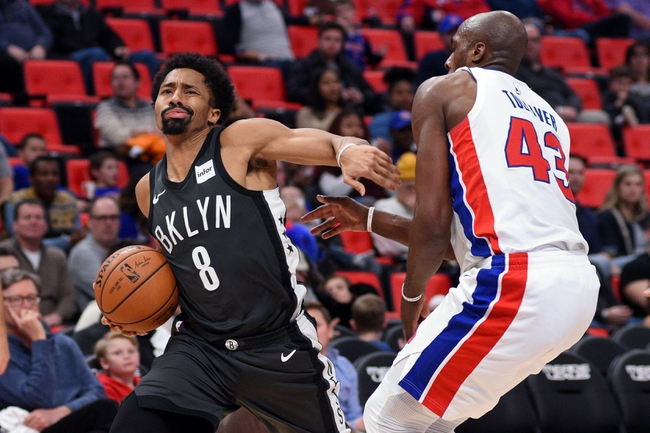 The Brooklyn Nets pay a visit to the Detroit Pistons at Little Caesars Arena on Wednesday night.

The Brooklyn Nets have been in a real slump as they’ve lost seven of their past eight games and they will be hoping to snap a three-game skid after last night’s 123-113 loss to the Rockets. DeMarre Carroll led the team with 21 points on seven of 12 shooting, Spencer Dinwiddie added 18 points with nine assists while Jarrett Allen chipped in with 16 points. As a team, the Nets shot 47 percent from the field and 16 of 35 from the three-point line but it wasn’t enough to keep up with the Rockets who shot 55 percent from the field led by 36 from James Harden. With the loss, Brooklyn dropped to 19-36 overall and 11-18 at home where they have lost three straight.

Meanwhile, the Detroit Pistons have been in great form and they will be gunning for a fifth straight win after blowing past the Trailblazers in a 111-91 home win on Monday. Blake Griffin led the team with 21 points, nine rebounds and six assists, Andre Drummond added 17 points with 17 rebounds and five assists while Anthony Tolliver chipped in with 15 points off the bench. As a team, the Pistons shot a healthy 50 percent from the field and 15 of 30 from the three-point line as they dominated the tired Trailblazers by 62-48 in the second half to make it look easy in the end. With the win, Detroit improved to 26-26 overall and 17-10 at home where they have won four in a row.

The Nets just haven’t been able to buy a win lately especially on the road where they’ve lost four straight, so I really don’t like their chances against this revamped Pistons team who have reeled off four straight wins. The betting trends are actually in favor of the Nets in this matchup, but I’m sticking with the new-look Pistons to stay hot with another home win over this struggling Nets playing on zero days’ rest.