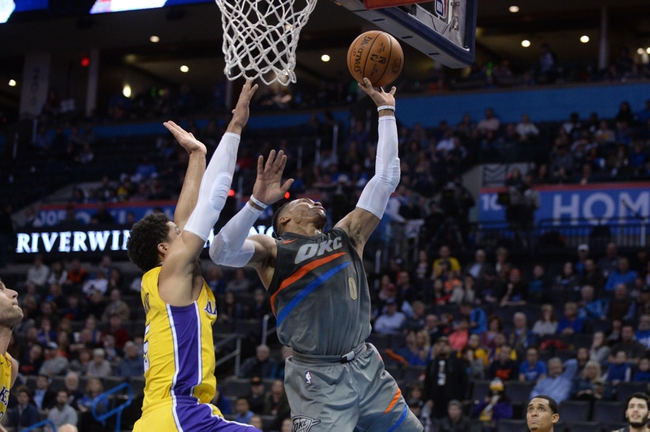 The Los Angeles Lakers play host to the Oklahoma City Thunder at the STAPLES Center on Thursday night.

The Oklahoma City Thunder will be feeling pretty good after snapping a four-game skid with a 125-105 win at Golden State on Tuesday. Paul George led the team in scoring with 38 points on 11 of 23 shooting to go with six steals, Russell Westbrook added 34 points with nine rebounds and nine assists while Jerami Grant provided the spark off the bench with 16 points. As a team, the Thunder shot 47 percent from the field and 12 of 31 from the three-point line as they led from start to finish after setting the tone with 42 points in the first quarter. Unfortunately, Carmelo Anthony left the game after just six minutes with an ankle sprain so both Anthony and Westbrook are listed as questionable for Thursday. With the win, Oklahoma City improved to 31-24 overall and 12-15 on the road.

Meanwhile, the Los Angeles Lakers have been in great form as they’ve won seven of their past nine games and they will be aiming for a fourth straight win after blowing past the Suns in a 112-93 home win on Tuesday. Brandon Ingram led the team with 26 points and five assists, Julius Randle added 21 points while Kyle Kuzma chipped in with 16 points off the bench. As a team, the Lakers shot 47 percent from the field and 11 of 26 from the three-point line but it was really about the second half where they took over the game and outscored the Suns by 55-36. With the easy win, Los Angeles improved to 22-31 overall and 13-14 at home where they have won seven in a row.

The Lakers have been in great form, especially at home where they’ve reeled off seven in a row but you can never count out the Thunder who could be without Westbrook and Anthony because they did just rout the Warriors in their own building. This is a tough one to pick, but I can smell a bit of an upset as the Lakers have really been playing some of their best basketball lately.