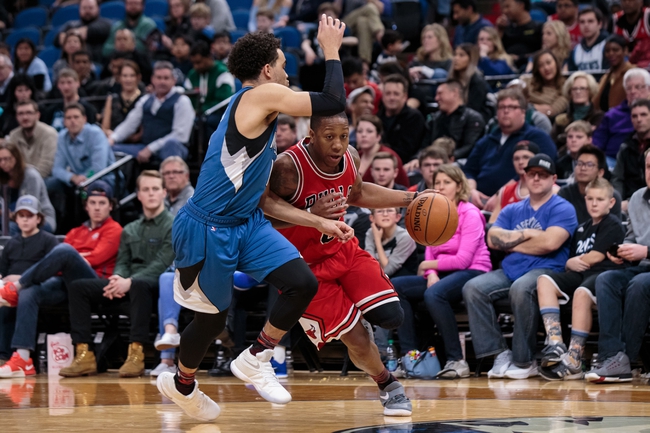 The Chicago Bulls play host to the Minnesota Timberwolves at the United Center on Friday night.

The Minnesota Timberwolves have been in a bit of a slump as they’ve lost five of their last eight games and they will still be nursing their wounds after falling to the Cavaliers by 140-138 in overtime on Wednesday. Jimmy Butler led the team with 35 points on 14 of 21 shooting, Karl-Anthony Towns added 30 points with 10 rebounds while Jeff Teague finished with a double-double of 14 points with 15 assists. As a team, the Timberwolves shot a sizzling 58 percent from the field and 19 of 33 from the three-point line but it still wasn’t enough as LeBron James made a clutch block on Butler with just 1.3 seconds left on the clock before draining the game-winner at the buzzer. With the painful loss, Minnesota dropped to 34-23 overall and 12-17 on the road.

Meanwhile, the Chicago Bulls have been in a major slump as they’ve lost eight of their last nine games and they will be looking to snap a seven-game skid after falling to the Kings in a 104-98 road loss on Monday. Zach LaVine led the team with 27 points on nine of 18 shooting, Justin Holiday added 20 points while Bobby Portis chipped in with 18 points, 14 rebounds and four assists. As a team, the Bulls shot 40 percent from the field and 14 of 36 from the three-point line but they didn’t compete for 48 minutes and got burned after leading by 28-9 after the first quarter. With the loss, Chicago dropped to 18-35 overall and 7-21 on the road where they have lost five in a row.

The Timberwolves will still be fuming after falling to the Cavaliers at the buzzer in overtime on Wednesday, so you know they’ll come out firing in this one and the Bulls really are the perfect team to take out their frustrations on as the Bulls just haven’t been able to buy a win lately. We’ve seen the Bulls pull off some upsets this season but I don’t think this will be one of them as the Timberwolves should be more than good enough to win this one by double digits.