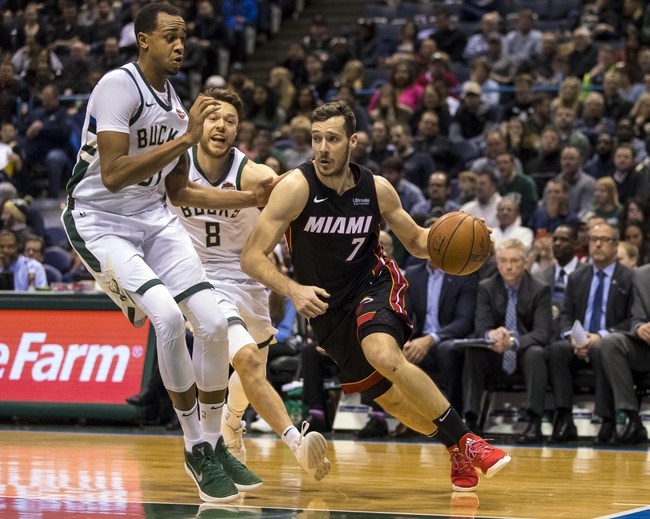 The Milwaukee Bucks and the Miami Heat collide at the American Airlines Arena on Friday.

The Milwaukee Bucks have been in solid form as they’ve won seven of their past eight games and they will be gunning for a fourth straight victory after blowing past the Knicks in a 103-89 road win on Tuesday. Giannis Antetokounmpo poured in 23 points with 11 rebounds and six assists, Eric Bledsoe added 23 points with eight assists while Khris Middleton chipped in with 20 points. As a team, the Bucks shot 45 percent from the field and eight of 26 from the three-point line but they did most of their damage in the third quarter where they outscored the Knicks by 26-17 to open up an unassailable 20-point lead. With the win, Milwaukee improved to 30-23 overall and 12-14 on the road where they have won three of their last four.

Meanwhile, the Miami Heat have lost seven of their past nine games and they will be hoping to snap a five-game skid after falling to the Rockets in a 109-101 home loss on Wednesday. Josh Richardson and Goran Dragic led the team with 30 points apiece while Hassan Whiteside added 16 points with 17 rebounds but no other player finished in double figures. As a team, the Heat shot 44 percent from the field and 13 of 32 from the three-point line but they just couldn’t get over the line despite trailing by just four points with 5:13 left in the fourth quarter as the Rockets leaned on Harden who finished with 41 points. With the loss, Miami dropped to 29-26 overall and 13-12 at home where they have lost two straight and three of their last four.

The Bucks have been in great form lately as they’ve lost just one of their last eight games and they’ve covered in five of their last six games following a win. However, while the Heat have been in a slump, they’ve actually fared well ATS lately as they’ve covered in eight of their last nine against teams with winning records. These two teams met twice in January and it was the Heat who won both meetings, but the Bucks have been playing well and I think they can get one back in this game.