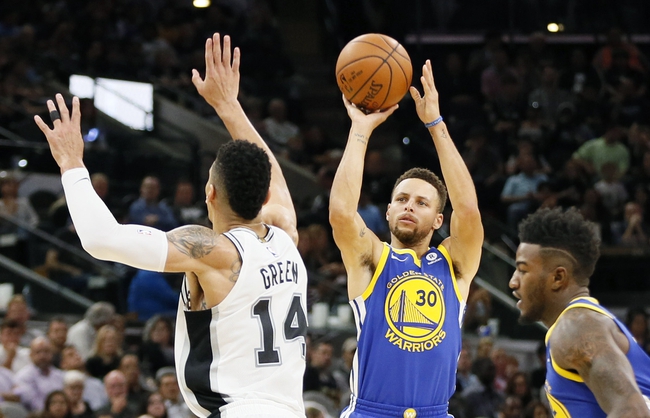 The San Antonio Spurs and the Golden State Warriors duke it out at the Oracle Arena on Saturday night.

The San Antonio Spurs have won five of their last eight games and they will be looking to stay hot after blowing away the Suns in a 129-81 road win on Wednesday. LaMarcus Aldridge led the team with 23 points, 13 rebounds and four assists, Patty Mills added 18 points off the bench while Danny Green chipped in with 17 points. As a team, the Spurs shot 49 percent from the field and 16 of 32 from the three-point line as they cruised to the easiest of victories after dominating the first half by 69-31. With the win, San Antonio improved to 35-21 overall and 13-15 on the road where they have won three of their last four.

Meanwhile, the Golden State Warriors have been in a minor slump as they’ve lost three of their last five games but they were able to snap a two-game skid with a 121-103 home win over the Mavericks on Thursday. Kevin Durant led the team with 24 points on eight of 13 shooting, Stephen Curry added 20 points with eight assists while Klay Thompson chipped in with 18 points and four assists. As a team, the Warriors shot 51 percent from the field and 14 of 29 from the three-point line but they really couldn’t gain the ascendancy until the second half where they outscored the Mavericks by 61-43 to make it look easy in the end. With the win, Golden State improved to 42-13 overall and 20-7 at home.

The Spurs haven’t been in the best of form but they’re coming off a massive win over the lowly Suns to make it three wins in their last four road games. The Warriors are coming off a nice win over the Mavericks but they’ve had trouble with slow starts and it almost burned them against the Mavericks. These two teams have only met once this season and it was the Warriors who cruised to a 112-92 win back on Nov 2, but while I have the Warriors winning once again, the Spurs have covered in each of their last four road games and I think that trend continues in this one.