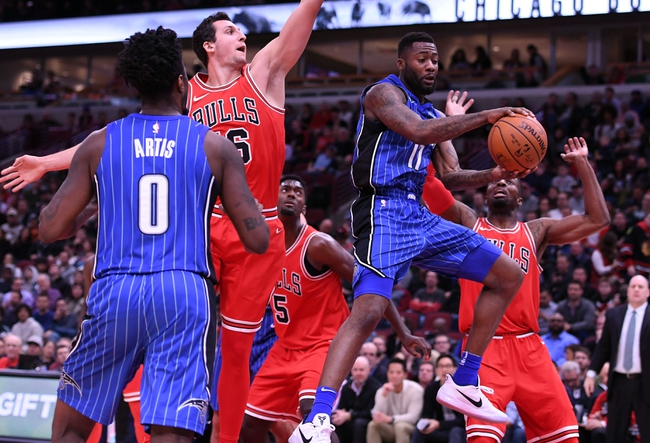 The Chicago Bulls play host to the Orlando Magic at the United Center on Monday night.

The Orlando Magic have been in decent form lately as they’ve won four of their last six games but they will be looking to bounce back after having their three-game win streak snapped by the Bucks in a 111-104 loss on Saturday. Mario Hezonja led the team in scoring with 23 points on eight of 16 shooting, Evan Fournier added 20 points while Shelvin Mack chipped in with a double-double of 19 points with 10 assists off the bench. As a team, the Magic shot 44 percent from the field and eight of 30 from the three-point line but the Bucks were simply too good in the second half where they outscored the Magic by 61-50 behind 32 points from Giannis Antetokounmpo. With the loss, Orlando fell to 18-37 overall and 11-15 at home.

Meanwhile, the Chicago Bulls have been in a major slump as they’ve lost eight of their last nine games and they will be aiming to bounce back after falling to the Wizards in a 101-90 home loss on Saturday. Justin Holiday led the team in scoring with 15 points, Bobby Portis added 13 points off the bench while Robin Lopez, Lauri Markkanen and David Nwaba each scored 12 points. As a team, the Bulls shot 42 percent from the field and nine of 32 from the three-point line but the Bulls never really threatened after falling behind by 10 points at halftime. To make matters worse, Portis was assessed a flagrant 2 foul and ejected for a hard foul on the Wizards’ Tomas Satoransky. With the loss, Chicago fell to 19-36 overall and 12-15 at home where they have lost four of their last five.