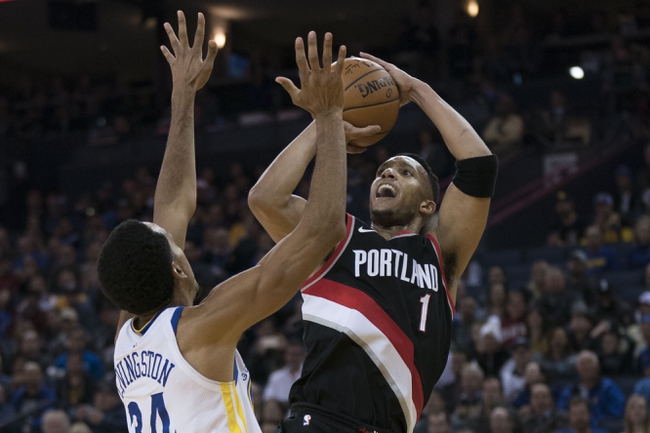 The Golden State Warriors and the Portland Trailblazers collide at the Moda Center on Wednesday night.

The Golden State Warriors have lost three of their last seven games but they will be gunning for a fourth straight win after making light work of the Suns in a 129-83 home win on Monday. Stephen Curry led the team with 22 points, nine rebounds and seven assists, Omri Casspi added 19 points while Kevin Durant added 17 points with seven rebounds and six assists. As a team, the Warriors shot a sizzling 58 percent from the field and 11 of 26 from the three-point line as they made it look like a training session against the Suns but the real story of the night was the coach Kerr allowed the players to take turns coaching the team which really kept the team engaged for all four quarters. Draymond Green sat out the game with a finger sprain but he is listed as questionable for Wednesday.

Meanwhile, the Portland Trailblazers have been in a bit of a slump lately as they’ve lost four of their last six overall and they will be hoping to bounce back after getting routed by the Jazz in a 115-96 home loss on Sunday. Damian Lillard led the team with 39 points on 12 of 25 shooting, CJ McCollum added 22 points while Shabazz Napier chipped in with 10 points. As a team, the Trailblazers shot 40 percent from the field and nine of 25 from the three-point line as they jumped out to the early lead until the Jazz took over in the 38-19 third quarter to lead by as many as 20 points. With the loss, Portland dropped to 31-26 overall and 16-11 at home where they had won nine straight before Sunday’s loss.

The Warriors will likely be without Green again, but you’d hardly notice if they play as well as they did against the hapless Suns in their last outing. Meanwhile, the Trailblazers were playing some great basketball but they’ve hit a bit of a bump in the road lately as they’re coming into this one fresh off a beatdown at the hands of the Jazz. These two teams have already met once this season with the Warriors winning by 111-104 back on Dec 11 and I’m expecting a similar result as the Warriors should come out on top if they play like they did on Monday.