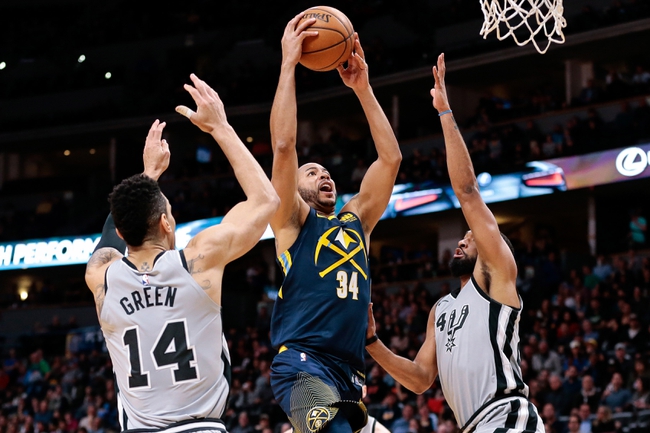 The San Antonio Spurs travel to the Pepsi Center to take on the Denver Nuggets on Friday night.

The San Antonio Spurs have really fallen off the pace lately as they’ve lost five of their last six games and they will be hoping to snap a three-game skid after falling to the Nuggets in a 117-109 road loss on Feb 13. Joffrey Lauvergne led the team with 26 points and 11 rebounds, Tony Parker added 17 points off the bench while Dejounte Murray and David Bertans chipped in with 12 points each. As a team, the Spurs shot 53 percent from the field and six of 22 from the three-point line but they went ice-cold in the fourth quarter where the Nuggets outscored them by 30-19. With the loss, San Antonio dropped to 35-24 overall and 13-18 on the road.

Meanwhile, the Denver Nuggets have won six of their last seven games and they will be gunning for  a fourth straight win after beating the Bucks by 134-123 on Feb 15. Nikola Jokic led the team with 30 points, 15 rebounds and 17 assists, Gary Harris added 28 points, Jamal Murray scored 26 points while Will Barton chipped in with 19 points. As a team, the Nuggets shot 55 percent from the field and a sizzling 24 of 40 from the three-point line as they poured in 74 points in the first half to lead by as many as 23 points before the Bucks made the most of garbage time to keep the final score respectable. With the win, Denver improved to 32-26 overall and 9-19 on the road.

The Spurs have been in a world of hurt lately and all the news about Kawhi Leonard being disconnected from the team certainly doesn’t help. The Spurs have covered in 19 of the last 26 meetings in Denver but the Nuggets have covered in each of their last four home games and this looks like a great opportunity to peg one back against the Spur while they're struggling.