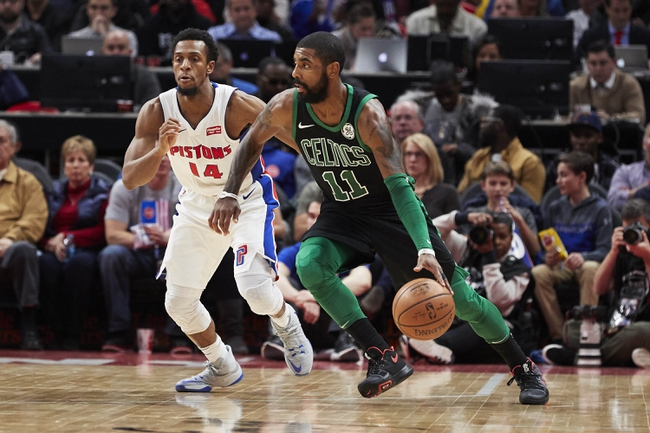 The Boston Celtics pay a visit to Little Caesars Arena to take on the Detroit Pistons on Friday night.

The Boston Celtics will be looking to bounce back after losing four of their last five games heading into the All-Star break and they will be hoping to snap a three-game skid after their 129-119 loss to the Clippers on Feb 14. Kyrie Irving led the team with 33 points and eight assists, Al Horford added 20 points while Marcus Morris and Terry Rozier each contributed 13 points. As a team, the Celtics shot 43 percent from the field and 15 of 31 from the three-point line but the game went down to the fourth quarter where the Clippers took over with a decisive 10-0 run. With the loss, Boston dropped to 40-19 overall and 21-11 at home.

Meanwhile, the Detroit Pistons have won six of their past nine games and they were able to snap a three-game skid with a 104-98 home win over the Hawks on Feb 14. Ish Smith led the team with 22 points and nine assists, Reggie Bullock added 15 points, Stanley Johnson scored 14 points while Andre Drummond and Blake Griffin each scored 13 points. As a team, the Pistons shot 42 percent from the field and 13 of 33 from the three-point line as they dominated the Hawks for three quarters to lead by as many as 30 points before the Hawks rallied to within four points, but the Pistons were able to hold on. With the win, Detroit improved to 28-29 overall and 19-12 at home.

The All-Star break couldn’t arrive quick enough for the Celtics who were really struggling for a little while there but it’s not like the Pistons have been playing well themselves as they lost three in a row before escaping against the lowly Hawks. The Celtics won the most recent meeting, a 91-81 win back on Dec 10 and I’m expecting a similar result even though the Pistons have Griffin now. The Celtics are due to make their run towards the playoffs and I think it begins with a win and cover here.