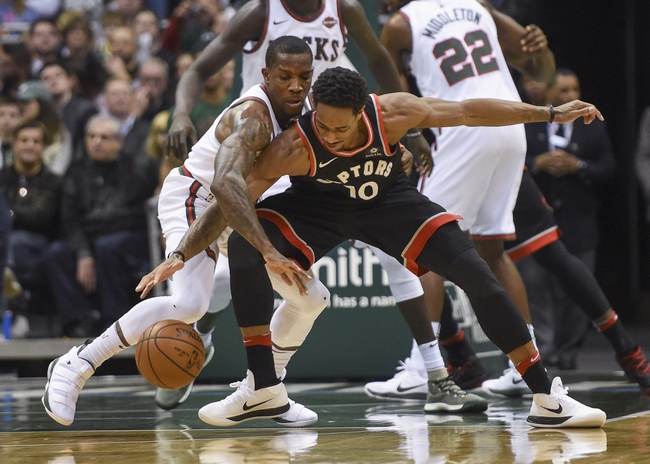 The Milwaukee Bucks and the Toronto Raptors do battle at the Air Canada Centre on Friday night.

The Milwaukee Bucks have been in great form as they’ve won nine of their last 12 games but they will be looking to bounce back after falling to the Nuggets in a 134-123 home loss on Feb 15. Giannis Antetokounmpo led the team with 36 points with 11 rebounds and 13 assists, Eric Bledsoe added 27 points with eight assists and five steals while Khris Middleton chipped in with 17 points. As a team, the Bucks shot 53 percent from the field but there was no keeping up with the Nuggets who shot a healthy 55 percent from the field and 24 of 40 from the three-point line. With the loss, Milwaukee dropped to 32-25 overall and 19-10 at home where they have won five of their last six.

Meanwhile, the Toronto Raptors have been on a tear lately as they will be gunning for an eighth straight victory after blowing past the Bulls in a 122-98 road win on Feb 14. Kyle Lowry led the team with 20 points, seven rebounds and 10 assists, Serge Ibaka added 20 points on nine of 12 shooting while Jonas Valanciunas chipped in with 14 points. As a team, the Raptors shot 52 percent from the field and 14 of 38 from the three-point line but they made it look all too easy after taking control of the game after outscoring the Bulls by 34-16 in the second quarter. With the win, Toronto improved to 41-16 overall and 17-12 on the road where they have won three of their last four.

The Bucks have been playing pretty well lately but they’ve already lost to the Raptors twice this season. These two squads last met on Jan 5 and it was the Raptors who won by 129-110 so while I’m expecting a better fight from the Bucks, I’m still sticking with the red-hot Raptors to finish with the win and cover in this one as their bench players have been on fire lately.