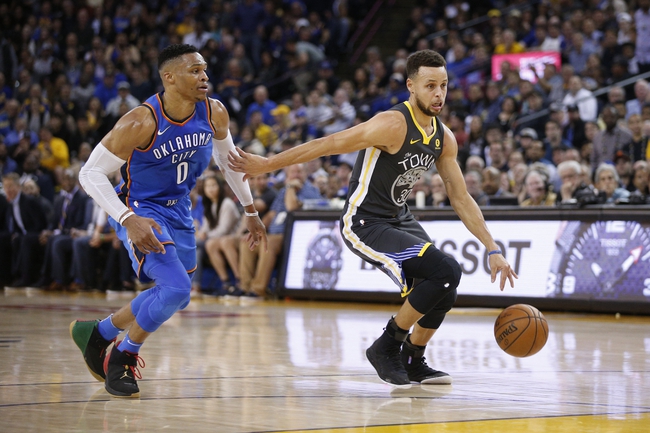 The Oklahoma City Thunder and the Golden State Warriors collide at the Oracle Arena on Saturday night.

The Oklahoma City Thunder have lost six of their past 10 games but they will be aiming for a third straight win after sneaking past the lowly Kings in a 110-107 on Thursday. Paul George led the team with 26 points, seven rebounds and eight assists, Carmelo Anthony added 23 points while Russell Westbrook racked up a triple-double of 17 points with 15 rebounds and 11 assists. As a team, the Thunder shot 44 percent from the field and 14 of 35 from the three-point line as they dominated the Kings early to lead by as many as 23 points in the first quarter before closing the game on an 8-2 run to escape with the narrow victory. It certainly wasn’t the most convincing of wins but it does elevate OKC to 34-26 overall and 14-16 on the road.

Meanwhile, the Golden State Warriors have won four of their last five games and they will be looking to stay hot after Thursday’s 134-127 home win over the Clippers. Stephen Curry led the way with 44 points and 10 assists while shooting 14 of 19 from the field and eight of 11 from the three-point line. Kevin Durant added 24 points with eight assists, Klay Thompson added 19 points while Draymond Green chipped in with 14 points and six assists. As a team, the Warriors shot a sizzling 62 percent from the field and 14 of 25 from the three-point line but they looked tired coming fresh off the All-Star break which allowed the Clippers to hang around till the end. With the win, Golden State improved to 45-14 overall and 23-7 at home.

These two squads have already met twice this season with the Thunder winning by double-digits on each occasion. The Warriors have been in solid form lately and their offense was certainly on another level on Thursday with Curry leading the way with his 44 points, but this just seems like too many points to be laying the Thunder who have owned this matchup this season. I like the Warriors to get the win even with Green listed as probable with shoulder soreness, but I’m taking the Thunder with the points in what should be a close one.