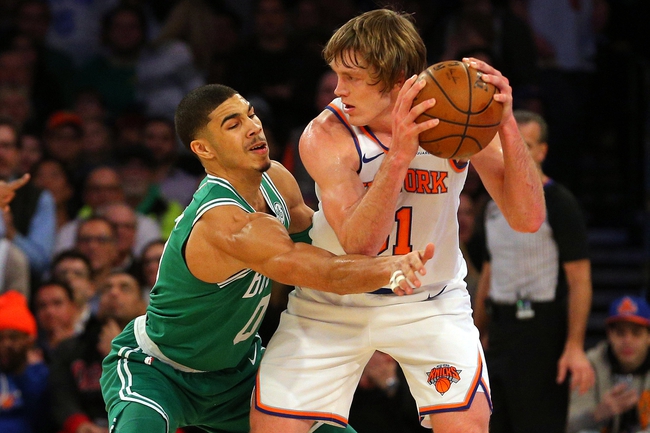 The Boston Celtics and the New York Knicks duke it out at Madison Square Garden on Saturday.

The Boston Celtics have been struggling a bit lately as they’ve lost four of their last six games but they were able to snap a three-game skid with last night’s 110-98 win at Detroit. Kyrie Irving scored 18 points with six assists while Jayson Tatum added 15 points on six of nine shooting, but credit this win to the bench players as they combined for 65 points highlighted by a team-high 19 points from Daniel Theis. As a team, the Celtics shot 48 percent from the field and 17 of 39 from the three-point line as they cruised to victory after dominating the second quarter by 38-21 to take a 12-point lead going into halftime. With the win, Boston improved to 41-19 overall and 20-8 on the road where they have won three of their last four.

Meanwhile, the New York Knicks have been in a slump as they’ve lost 11 of their last 14 games but they will be feeling a little better after snapping an eight-game losing streak with a 120-113 win at Orlando on Thursday. Trey Burke led the team with 26 points and six assists off the bench, Tim Hardaway Jr. added 23 points with six assists while Enes Kanter chipped in with 12 points and 12 rebounds. As a team, the Knicks shot 48 percent from the field and seven of 25 from the three-point line as they outscored the Magic by 57-44 in the second half after allowing 41 points in the first quarter. With the win, New York improved to 24-36 overall and 8-24 on the road where they had lost five in a row before Thursday.

Head to head, the under is 20-8 in the last 28 meetings and the Celtics are 5-2 ATS in the last seven meetings.

The Knicks were able to snap out of their funk with a hard-fought win at Orlando on Thursday, but they’ve struggled to win games lately and will likely do it tough against a Celtics team who have already beaten them twice this season. The last time these two squads met, the Celtics won by 103-73 back on Jan 31, so while they're playing on zero days' rest, I have to stick with the boys in green to get the win and cover on the road in this one.