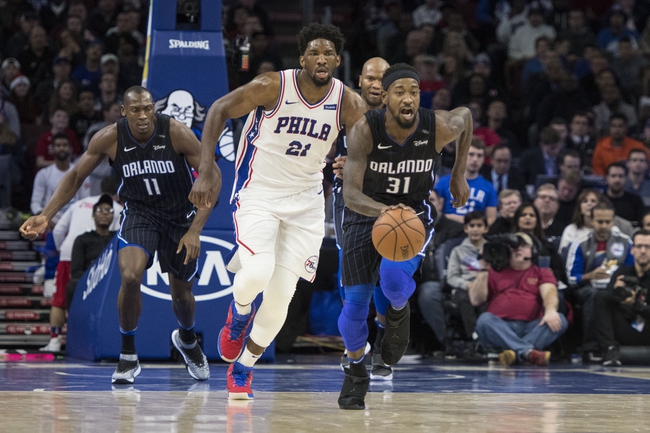 The Philadelphia 76ers play host to the Orlando Magic at the Wells Fargo Center on Saturday night.

The Orlando Magic have lost five of their last nine games and they will be hoping to put a halt to an ugly four-game skid after falling to the Knicks by 120-113 on Thursday. Evan Fournier led the team with 25 points and five assists, Nikola Vucevic added 19 points on eight of 11 shooting while Mario Hezonja chipped in with 15 points off the bench. As a team, the Magic shot 51 percent from the field and 11 of 24 from the three-point line as they poured on 41 points in the first quarter before fizzling out in the second half where they were outscored by 57-44. With the loss, Orlando fell to 18-40 overall and 11-17 at home where they have lost three straight.

Meanwhile, the Philadelphia 76ers have been on a surge lately as they’ve won seven of their last eight games and they will be gunning for a sixth straight win after sneaking past the Bulls in a 116-115 road win on Thursday. Ben Simmons led the team with 32 points, seven rebounds and 11 assists, Joel Embiid added 30 points with 13 rebounds and five assists while JJ Redick chipped in with 14 points. As a team, the 76ers shot 51 percent from the field and 11 of 29 from the three-point line but this game went down to the wire with Simmons saving the day with the game-winning free throws with just 5.6 seconds left on the clock. With the win, Philadelphia improved to 31-25 overall and 13-15 on the road where they had lost four straight before Thursday.

These two teams have already met once this season with the 76ers winning by 130-111 back on Nov 25 and you would expect a similar result as the 76ers have been surging towards the playoffs while the end of the offseason can’t come quick enough for the Magic. The 76ers have covered in eight of their last nine home games and I think that trend continues tonight as they stay hot with a double-digit win.