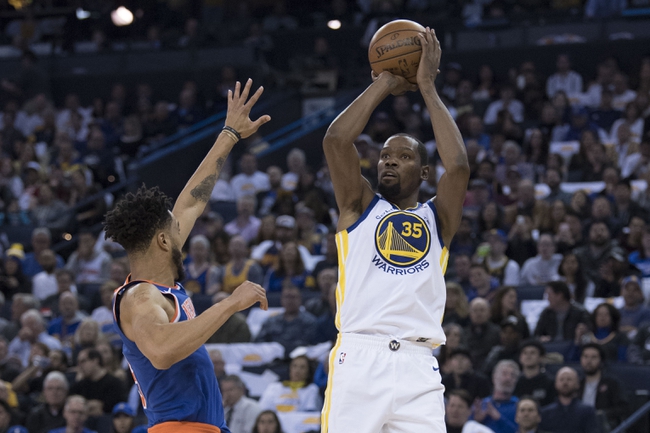 The Golden State Warriors and the New York Knicks duke it out at Madison Square Garden on Monday night.

The Golden State Warriors have been in strong form as they’ve won five of their last six games and they will be aiming for a third straight win after blowing past the Thunder in a 112-80 home win on Saturday. Kevin Durant led the team with 28 points on 10 of 20 shooting, Stephen Curry added 21 points with nine rebounds and six assists while Nick Young chipped in with 16 points in just 18 minutes off the bench. As a team, the Warriors shot 47 percent from the field and 17 of 38 from the three-point line but this game was tightly contested until the Warriors took over in the second half where they outscored the Thunder by 60-35 to make it look easy in the end. With the win, Golden State improved to 46-14 overall and 24-7 at home where they have won five in a row.

Meanwhile, the New York Knicks have been in terrible form as they’ve won just one of their last 10 games and they will be hoping to bounce back after falling to the Celtics in a 121-112 home loss on Saturday. Trey Burke led the team with a team-high 26 points with eight assists off the bench, Tim Hardaway Jr. added 17 points while Michael Beasley chipped in with 15 points. As a team, the Knicks shot 47 percent from the field and a miserable six of 27 from the three-point line but to their credit, they were able to hang with the Celtics for all four quarters despite the Celtics’ Kyrie Irving scoring 31 points. With the loss, New York dropped to 24-37 overall and 16-13 at home where they have lost four in a row.

Head to head, the under is 4-1 in the last five meetings and the Warriors are 5-2 ATS in the last seven meetings in New York.

These two squads have only met once so far this season and it was the Warriors who won by 123-112 back on Jan 23. The Warriors have gone through some struggles since then but they’ve really heated up lately and looked particularly good in their blowout win over the Thunder on Saturday. The Knicks have failed to cover in each of their last four home games and have only covered in one of their last eight games overall and I think that trend continues in this one as the Warriors should be way too good.