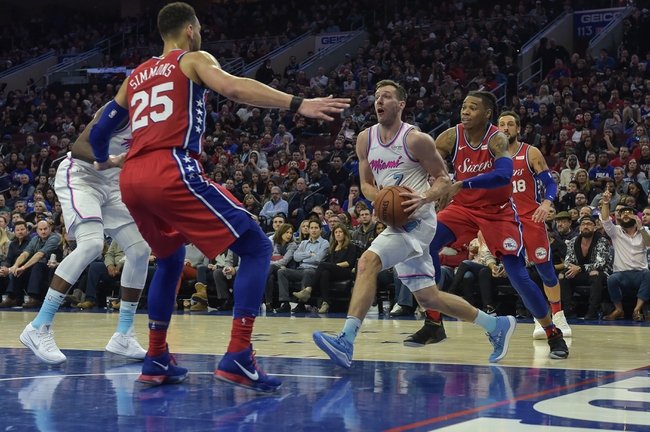 The Philadelphia 76ers pay a visit to the American Airlines Arena to take on the Miami Heat on Tuesday night.

The Philadelphia 76ers have been in great form as they’ve won eight of their past 10 games but they will be looking to bounce back after having their seven-game win streak snapped by the Wizards in a 109-94 road loss on Sunday. Joel Embiid led the team with 25 points, 10 rebounds and four assists, Ben Simmons added 16 points with eight rebounds and eight assists while Dario Saric chipped in with 13 points. As a team, the 76ers shot just 36 percent from the field and nine of 33 from the three-point line which was never going to be enough to get over the line as the 76ers were in a deep hole after the Wizards outscored them by 37-20 in the second quarter. With the loss, Philadelphia dropped to 32-26 overall and 13-16 on the road.

Meanwhile, the Miami Heat have been in a real slump lately as they’ve lost eight of their past 10 games but they were able to put a halt to a three-game skid after blowing past the Grizzlies in a 115-89 home loss on Saturday. Tyler Johnson led the team with 23 points on six of 12 shooting, Justise Winslow added 17 points while Wayne Ellington and Josh Richardson each scored 15 points. As a team, the Heat shot 46 percent from the field and 12 of 33 from the three-point line as they cruised to victory after a dominant 32-18 third quarter effort. With the win, Miami improved to 31-29 overall and 15-12 at home.

Head to head, the home team is 5-1 ATS in the last six meetings and the over is 4-1 in the last five meetings.

The 76ers lead the season series by 2-0 but they were both close games that could have gone either way. The Heat have struggled to pick up wins over the last 10 games but each of their last eight losses have come by a margin of eight points or less so they’ve certainly been competitive on a nightly basis. With that being said, I’m expecting another close game but this time I’m going with the Heat to get the win and cover as they’ve covered in each of their last five games while the 76ers have failed to cover in their last six road games.