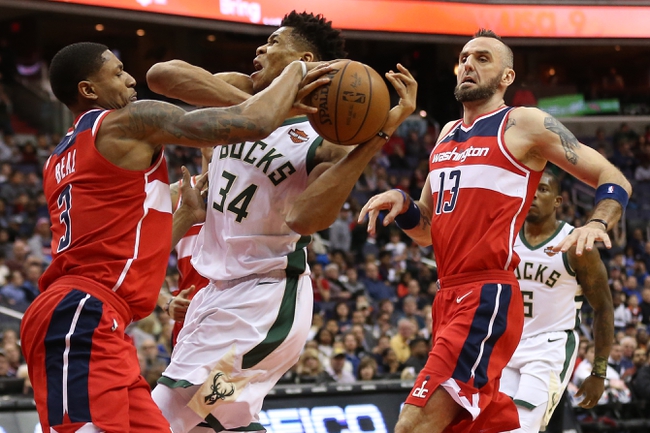 The Washington Wizards and the Milwaukee Bucks duke it out at the Bradley Center on Tuesday night.

The Washington Wizards have been red-hot lately as they’ve won nine of their last 12 games and they will be looking to stay hot after blowing out the in-form 76ers in a 109-94 home win on Sunday. Bradley Beal led the team with 24 points with eight assists, Otto Porter Jr. added 23 points while Kelly Oubre Jr. chipped in with 19 points and three assists off the bench. As a team, the Wizards shot a healthy 54 percent from the field and 12 of 25 from the three-point line but they did most of their damage in the second quarter where they outscored the 76ers by 37-20 to take a 19-point lead going into halftime. With the easy win, Washington improved to 35-25 overall and 18-11 at home.

Meanwhile, the Milwaukee Bucks have been in pretty good form themselves as they’ve won 10 of their past 14 games but they will be looking to bounce back after falling to the Pelicans by 123-121 in overtime on Sunday. Khris Middleton led the team with 25 points on eight of 16 shooting, Giannis Antetokounmpo and Eric Bledsoe each scored 20 points while Jabari Parker chipped in with 18 points in his best scoring performance since returning to action. As a team, the Bucks shot 45 percent from the field and seven of 25 from the three-point line but they just couldn’t hold off the Pelicans despite dominating the first half to lead by as many as 18 points. With the loss, Milwaukee dropped to 33-26 overall and 19-11 at home.

The Bucks will be itching to get back on the court coming off that tough overtime loss to the Pelicans but they’ve run into a Wizards team who have been impressive despite the absence of their leader in John Wall who remains without a timetable for his return. These two teams have met three times this season with the Bucks winning the last two meetings, but the Wizards have covered in six of their last seven road games and I think that trend continues in this one.