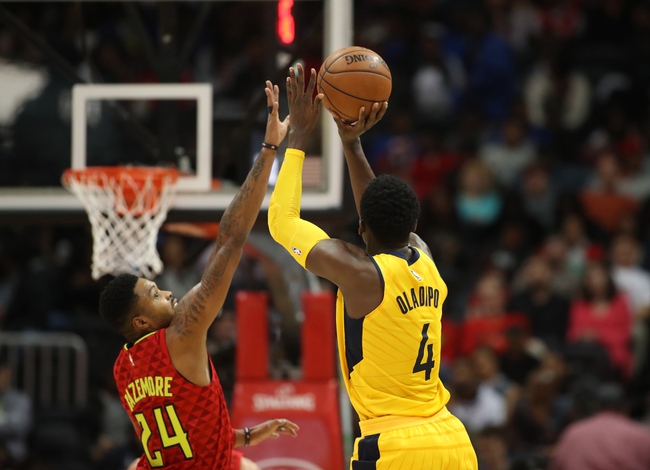 The Indiana Pacers pay a visit to the Philips Arena to take on the Atlanta Hawks on Wednesday night.

The Indiana Pacers have been in pretty good form lately as they have won 10 of their last 14 games but they will be looking to bounce back after having their four-game win streak snapped by the Mavericks in a 109-103 road loss on Monday. Myles Turner led the team with 24 points and 11 rebounds on 10 of 14 shooting, Bojan Bogdanovic added 19 points with eight rebounds while Victor Oladipo chipped in with 21 points and four assists. As a team, the Pacers shot 47 percent from the field but just five of 20 from the three-point line but they remained in the contest throughout the game until the fourth quarter where they allowed the Mavericks to pour on 41 points. It was an uncharacteristically disjointed performance from the Pacers who drop to 34-26 overall and 13-15 on the road.

Meanwhile, the Atlanta Hawks have been in a real slump as they’ve lost 11 of their last 15 games and they will be hoping to avoid a fifth straight loss after getting blown out by the Lakers in a 123-104 home loss on Monday. Taurean Prince led the team with 24 points, Dennis Schroder added 20 points while Isaiah Taylor chipped in with 16 points off the bench. As a team, the Hawks shot just 37 percent from the field and eight of 36 from the three-point line but they were always playing catch-up after the Lakers dominated the first half where they were outscored by 64-46. With the loss, Atlanta fell to 18-43 overall and 13-18 at home.

These two met less than week ago and it was the Pacers who cruised to a 116-93 home win thanks to Domantas Sabonis who scored 21 points and Thaddeus Young who scored 20 points. The Hawks haven’t been playing well lately but I do expect them to bounce back in some capacity. However, the Pacers have covered in each of the last four meetings and I think they make it five with another easy win here.